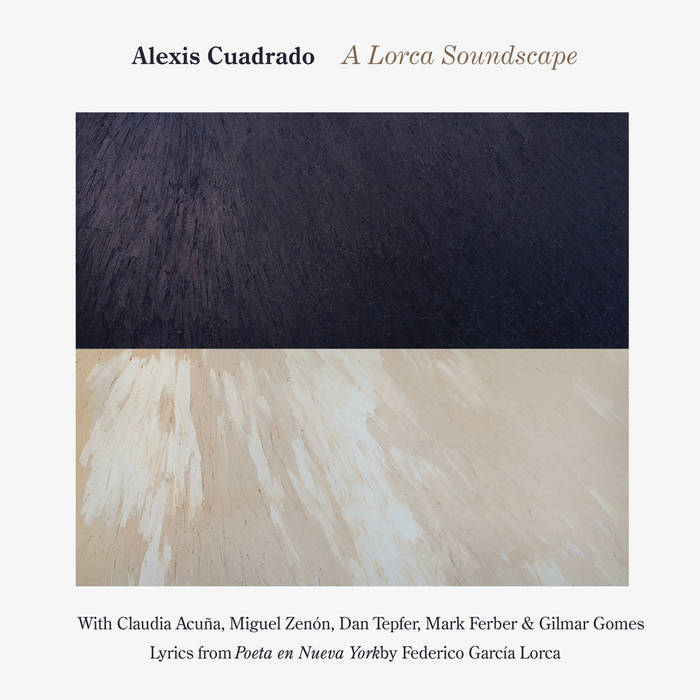 Long before terms like "1 percenters" and "Occupy" entered our current vernacular, the great Spanish playwright and poet, Federico García Lorca, was writing in 1929 about the inequality he witnessed while in New York City in. Bassist and composer Alexis Cuadrado now presents, A Lorca Soundscape, a brand new cycle of original jazz protest songs drawn from Lorca's poetry, to be released on Sunnyside Records on September 24. “In a moment like the one we’re living in now, with the world economic crisis and movements like Occupy Wall Street, getting back to Poet in New York is my way of forming a protest. Even though the book was written over eighty years ago, it baffles me to see how the inequality, racism and injustice that Lorca describes are still present in our daily narrative. The characters may have changed, but the plot line is the same,” says Cuadrado.

The author and literary critic Melcion Mateu elaborates in the album's liner notes: "Alexis Cuadrado is an artist in pursuit of lyricism, a lyricism that functions as a necessary contrast to the schizophrenic logic of a sick city and society; like the voice that prevails against chaos and injustice so as to make its message heard. Perhaps it’s for this reason that A Lorca Soundscape is an album both clear and complex at once: complex like the city depicted by Lorca, by means of his accumulation of discordant images, his rhythms and sounds; and clear by means of the sheer power of his words. On Cuadrado's A Lorca Soundscape, the rhythms of the city-which move from swing to bolero, passing through flamenco and new music, live together with the exigency to express his message (...) And, there is always an emotion, an “ecstatic truth”, to put it in the words of the filmmaker Werner Herzog, words that Cuadrado often repeats, that reveals immediately the moment in which an individual recognizes him or herself before the agitating great metropolis."

Advance praise for A Lorca Soundscape:
"Alexis Cuadrado has produced a masterwork of jazz protest that links the excruciating travails of the Great Depression in New York as viewed through the eyes of poet Federico García Lorca to today’s cultural inequalities and injustices. What makes Cuadrado’s creative action so compelling is how he and his fellow musicians and vocalists deliver his original music—not as a cerebral or technical exercise but with the deep, soulful wonder of duende, which in the poet’s notion conjures up a surging of truth and spirit that emanates from the soles of the feet." - Dan Ouellette (author of Ron Carter: Finding the Right Notes and the forthcoming Bruce Lundvall: Playing by Ear)

"Ever inventive and searching, bassist Alexis Cuadrado fearlessly navigates crosscurrents of modern jazz, Latin and world music to underscore the relation between today’s economic disparities with those of the past on 'A Lorca Soundscape,' based on Federico Garcia Lorca’s poems about 1929 New York. Vocalist Claudia Acuña gives the poet’s words a robust and emotional reading that surge with feeling and an appreciated efficacy. But the heavy lift is accomplished by Cuadrado, along with a band of sharp-eared and extremely talented musicians, who gives resounding shape to the material by translating the fire and passion of Lorca’s language into a work that’s resonant and sonically engaging." - Nick Bewsey, ICON, Jazz In Space Blog
"The chaotic times that fed the creation of the poems Federico Garcia Lorca wrote in 'Poet in New York' echoes in the dramatic and compelling music Alexis Cuadrado constructed for 'A Lorca Soundscape'. His music surrounds, caresses and pushes against the harsh, brooding yet often magical images. Like the words and person that inspired the project, 'A Lorca Soundscape' is both contemporary and timeless." - Richard Kamins, Step Tempest

More on Alexis Cuadrado: An award-winning composer, solid bassist, and renowned educator; Barcelona-born Alexis Cuadrado has become one of the most sought-after musicians on the New York jazz scene. Cuadrado's compositions show a unique voice that draws from the crossover of jazz, flamenco and new music.

His output as a composer has peaked in recent years, with new works such as Noneto Ibérico, A Lorca Soundscape, Jazz Miniatures for Double Quartet and Hispalis . Cuadrado has published four CDs as a leader: Noneto Ibérico (BJURecords, 2011), his most recent recording, and a seminal work that has received massive critical acclaim. His previous albums, Puzzles (BJURecords, 2008), Visual (Fresh Sound New Talent, 2004) and Metro (FSNT, 2001), document his compositions and have received excellent reactions from critics, presenters and fans alike.

Alexis has also exceptional credits as a performer, and has collaborated with such greats as Kurt Rosenwinkel, Mark Turner, Grammy Award winner Angelique Kidjo, Youssou N'Dour, Dianne Reeves, Omara Portuondo, Steve Wilson or Seamus Blake amongst many others, and he keeps his sideman calendar busy freelancing with different bands around the world. Cuadrado is a devoted educator and a current faculty member at the New School in NYC. He also regularly teaches worldwide as a guest lecturer.

Poet in New York is Lorca’s poetic response to that experience. In an interview years after, Lorca would describe his perception of the city: “Impressively cold and cruel...a spectacle of suicides, of hysterical people and de-moralized groups. A dreadful spectacle absent of grandeur. No one can imagine the solitude a Spaniard feels there, and even more one from the south.” Poet in New York speaks through this solitude: a solitude between alienated multitudes of Latinos, Jews and Blacks in the face of the poet’s astonishment and vague recognition of others and of himself; of impossible desire; of abandoned dreams; of the violence in the night’s intimacy; and of the devastating routine that carries workers to their jobs like animals to the slaughterhouse. We find here in the most surreal, experimental and frazzled Lorca, simultaneously, the most socially-engaged Lorca.