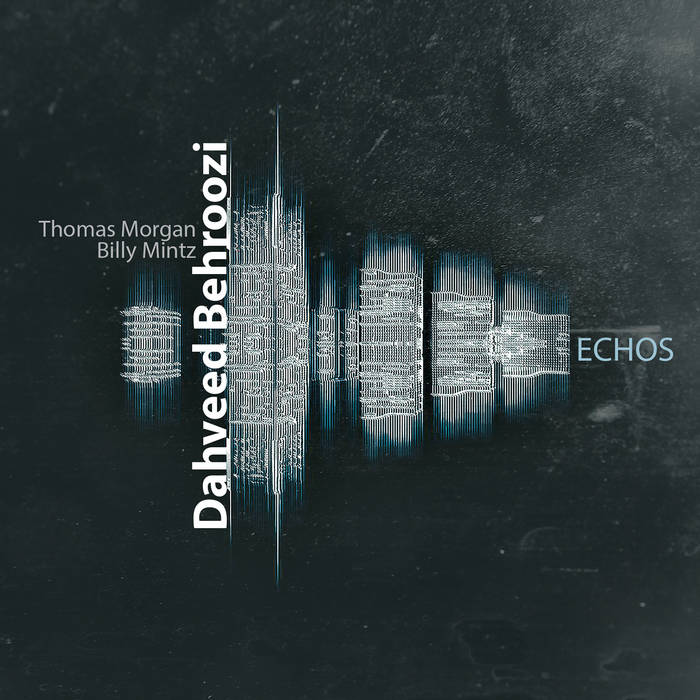 Trained in both jazz and classical music, West Coast-based pianist Davheed Behroozi is the uncommon musician to earn endorsements from icons in both disciplines. Ursula Oppens, a renowned virtuoso of contemporary classical music, has praised Behroozi’s “creativity, curiosity and integrity,” adding that “his performances are stunning, his interpretations astonishing.” Likewise, jazz piano star Fred Hersch has described Behroozi’s music-making as “intense and immersive,” with the pianist’s evolution as an improviser revealing “deep musical knowledge and devotion.” The best presentation yet of Behroozi’s artistry as a jazz musician now comes with his sophomore album, Echos, to be released digitally and on CD via Sunnyside Records on June 4, 2021. Showcasing Behroozi’s richly atmospheric, even hypnotic compositions, the new disc – his first studio recording – features Behroozi in league with two of New York’s finest: bassist Thomas Morgan and drummer Billy Mintz, both master improvisers known for their subtle, individual sounds. They are an ideal complement to Behroozi’s rhapsodic, wide-screen pianism, which is as inspired by such jazz masters as Keith Jarrett, Herbie Hancock and Gonzalo Rubalcaba as it is classical exemplars Maurizio Pollini, Martha Argerich and Glenn Gould.

Echos – its title referring to the Greek for “reflected sound” – starts with the Paul Bley-evoking “Imagery,” an ideal album opener given its darkly enveloping lyricism and ravishing trio resonance. “This music, and the trio itself, is centered on sound rather than structure,” Behroozi explains. “Sound and vibe have become increasingly important to me as a player. Both Thomas and Billy have amazingly personal sounds on their instruments, and I’m especially drawn toward a less-is-more aesthetic, focusing on sheer character of sound. There is real dynamism in the music of Echos – particularly with a track like ‘Sendoff’ – but I really do love that hypnotic vibe, something you can hear in the tune ‘TDB.’ What’s beautiful about Thomas and Billy is that they can explore just one note for what seems like days and make you realize there can be a world of music in that single note.”

Born in 1981 and raised in San José, California, Behroozi met Morgan while they were nascent jazzers in Bay Area high schools. They re-connected in New York City when the pianist and bassist were both studying at the Manhattan School of Music in the early 2000s. Morgan has since become a veteran of dozens of high-profile recording sessions by the likes Paul Motian, Bill Frisell, Tomasz Stanko, Jakob Bro, Ron Miles, Dan Weiss, Dan Tepfer, Steve Coleman and Jim Black. The bassist introduced Behroozi to Mintz, who – in addition to working as a bandleader – has played with such diverse figures as Tony Malaby, Alan Broadbent, Sylvie Courvoisier & Mark Feldman, and David Bowie pianist Mike Garson. After graduating from the Manhattan School, Behroozi pursued his advanced studies at Brooklyn College, and he continued to play private sessions with Morgan and Mintz for years as well as performing in New York clubs, the trio honing its sense of exploratory, emotionally acute interplay.

“My first album, Games, came out in 2012 – it was a live trio album made in California that also included Thomas, along with Tim Bulkley on drums,” Behroozi says. “Besides the fact that the new record is a studio recording, there has been a lot of evolution from that album to Echos, in both the writing and the playing. The new album is looser, freer. I’m concentrating on my most direct impulses, whether it’s in the choice of notes or how they flow. Playing with Thomas and Billy is perfect for this – reacting in the moment is what they do. I have such trust in them. Thomas is a player of real intimacy, not only with his beautiful sound but with his note choices – and the emotional weight he can invest in each one, drawing you in. He also has a linear, storytelling dimension to his improvisations that I love. With Billy, he’s able to produce sounds on his kit – especially with cymbals – that I’ve never heard before. He’s a painter on the drums, as beautiful to watch as to hear. There’s a vintage glamour to what he does.”

Behroozi and company recorded Echos in 2019 with engineer Ryan Streber at the high-end Oktaven Audio in Mount Vernon, New York, with the pianist manning a gorgeous Steinway instrument. The trio arrayed together on the studio floor with no isolation, allowing keener interaction. The pianist’s favorite tune on the album is “TDB” (titled after the band member’s first initials), for its sense of spaciousness and patience. “Thomas and Billy aren’t afraid of letting there be real space in the music – and that takes a combination of courage and confidence,” Behroozi says. “I aspire to their level.”

There were no rehearsals for Echos, with Behroozi bringing only sketches for the tunes into the studio – sketches unseen by Morgan and Mintz before that day. “The compositions came out of me improvising at home, so I wanted to keep that free-flowing feel of discovery in the studio,” Behroozi explains. “This is a dream trio for that approach – we captured the masters in just a couple of takes. For one tune, ‘Chimes,’ we included both of the takes, because it’s a dynamic piece and each performance was so different.” Kindred to the above-mentioned “Imagery,” album highlight “Gilroy” is a dark-hued, melodious gem, named for the laidback town in California where Behroozi teaches at Gavilan College. The ruminative yet swinging “Tricks” is one of the album’s more upbeat numbers, while “Royal Star” is another slow-rolling, tune-rich beauty, its title referring to a variety of Magnolia bloom – with gardening having become a new pastime for Behroozi during the pandemic.

Behroozi strives to create “a multi-sensory landscape” with his music, impressionistically. “I’d like to evoke other senses with only sound,” he says. “Something akin to synaesthesia, so you can ‘hear’ the swing and sway of trees, for instance, or visualize colors. Most of all, I hope that Echos – like my favorite records do for me – creates emotional impressions for listeners, a resonance that stays with them.”