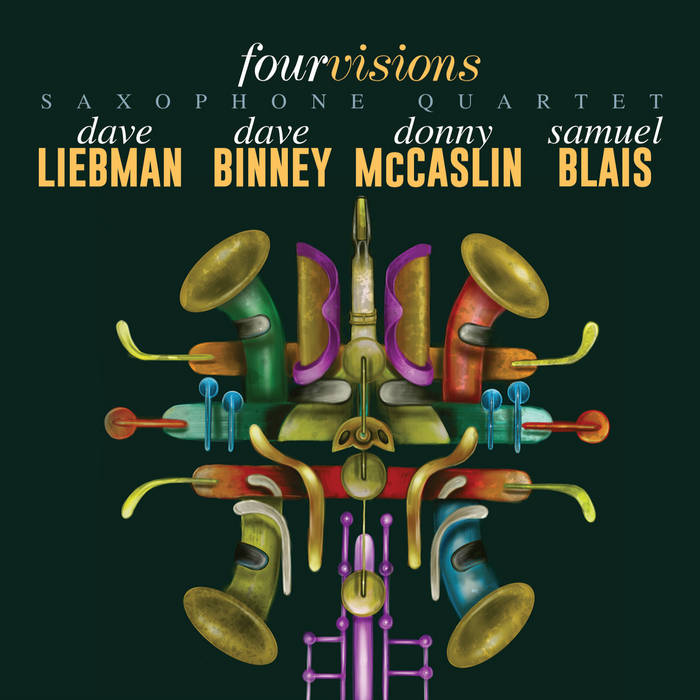 Samuel Blais began his saxophone study at nine years old. His focus led him to the Montreal Conservatory at seventeen where an open baritone position in the school’s saxophone quartet led him to put down his alto and fill the spot. This eventually led to the ensemble placing second in the Canadian Music Competition Finals while solidifying Blais’s love of the quartet configuration.

While attending McGill University, where he received a Bachelors in Jazz Performance, Blais became a member of the Montreal based Nota Bene Sax Quartet that focused on classical and contemporary music. After touring heavily for several years, the ensemble broke up as the members went on to further schooling. Blais found himself at the Manhattan School of Music in New York City where he met and befriended saxophone legend Dave Liebman.

Liebman and Blais’s relationship led to their playing and touring together, so it was only a matter of time before Liebman learned of the younger saxophonist’s hopes to start a saxophone quartet, enthusiastically supporting the idea. In late 2011, they began to brainstorm on other players who would fit, leading to tenor titan Donny McCaslin who had a relationship with Blais through various Montreal performances and master classes. Based on his close affiliation with McCaslin, alto great David Binney became an obvious choice for completing the ensemble. Thus, the Four Visions Saxophone Quartet was born.

Initially, the group toured through Quebec in early 2012, including hits at universities and clubs in Montreal and Quebec City. Samuel was able to secure a grant that allowed him to write seven pieces for the quartet. Liebman already had a number of pieces and both McCaslin and Binney were able to write their first works for this kind of ensemble, an exciting challenge for these fantastic artists.

The saxophone quartet is a tricky ensemble that is at the same time a lot of fun but very demanding technically. The saxophone quartet celebrates the instrument offering a lot of commonality, since they are all playing the same instrument, which embodies a rich legacy and history in jazz and contemporary music. The composers have to approach the ensemble as a chamber group with each member being especially responsible rhythmically. Remember the sax quartet configuration does not include a chord or rhythm instrument but, as you hear on this recording, the harmonic texture is quite pronounced and there is nothing musically missing.

It took some time for the quartet to record. They were finally able to reconvene for a handful of rehearsals in 2015 and a couple days of recording at Red Rock Recording Studio, near Liebman’s home in Pennsylvania.

The recording begins with Blais’s “Blaizza,” which attempts to blend jazz and contemporary classical composition in a two part piece inspired by composer Eugène Bozza's Andante & Scherzo with two pairs of horns questioning and answering back and forth. Binney’s “Dunes” begins like a chorale evolving into an impressive rhythmic exercise with an opportunity for each member to solo. McCaslin’s effervescent “Legions”
swings hard in a triplet feel with features for Liebman’s soprano and McCaslin’s tenor.

Blais wrote his reflective ballad “Et Voit Le Jour” for a jazz quartet and re-arranged it for this instrumentation knowing that the ensemble would sound great on this harmonically lush piece. Binney returns to the chorale concept on “Empty Sunbeams,” which utilizes rhythmic displacement to incredible effect in the middle of the piece leading to a surprising and restrained conclusion. Liebman’s powerful “A Moody Time” slowly evolves into a wild 15/8 groove with McCaslin and Blais playing rhythmic unisons as a power bassline.

On the canonical “Technicolor Penguins,” Binney provides another rhythmic marvel with stops and starts that playfully displace the melody, while McCaslin’s grooving “Buy A Mountain” is a low tone heavy exercise in time keeping with wild soprano and tenor features. Liebman’s “In Bach’s Studio” is a thru-composed tribute to the master with intervallic chromaticism in all its splendor and solo spots for all. Blais’s uptempo “Road Kill” ends the program with a free big bandesque sax section soli providing a sense of release at its energetic ending.

The love of this ensemble configuration has blossomed for Samuel Blais. Fortunately, he was able to assemble three remarkable saxophones in Dave Liebman, David Binney and Donny McCaslin to create the Four Visions Saxophone Quartet’s first recording. This music represents an inspiring performance by a group that challenges the paradigm of what a saxophone quartet can achieve.