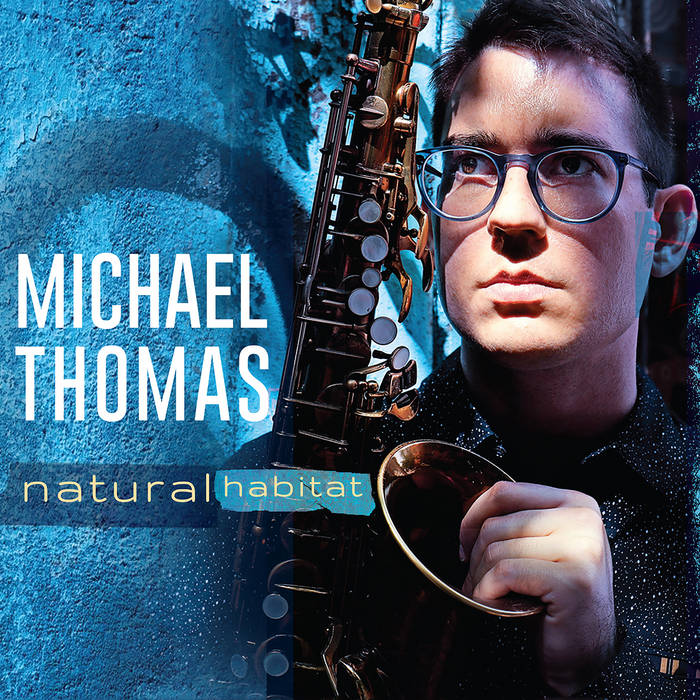 Developing as an artist requires an incredible amount of study and hard work honing skills. During this process, the burgeoning artist will naturally begin to find areas in which he or she feels more comfortable, their comfort zone. This concept reaches beyond a physical location. It can also apply to material and communal elements in the creation of art.

Saxophonist/bass clarinetist/composer Michael Thomas seems to have found his musical domain once he settled in New York City. His new recording, Natural Habitat, illustrates how his path to the City has placed him in a perfect spot, both physically and mentally, to create the best art that he can.

Originally from Florida, Thomas grew up playing classical saxophone and picking up clarinet and flute as doubling instruments in high school. He pursued music as an undergrad at the University of Miami and then went to Boston to get his masters at the New England Conservatory. His three years in Boston would be the most important years in the young reedist’s development. The inspiring tutorship of saxophone legends George Garzone and Jerry Bergonzi and the sweeping breadth of Miguel Zenón’s lessons bridged the gaps between many of the musical elements Thomas was juggling.

Thomas dreamed of reaching New York City, and the Artist Diploma program at Juilliard gave him the opportunity. His immediate contact with some of the best musicians in New York who were involved with the program, including Ron Blake, Steve Wilson and Frank Kimbrough, helped him break into the scene quickly. Working on Zenón’s Identities are Changeable large ensemble project really cemented his credibility, as he worked with a generation of musicians he had previously looked up to, as an equal.

For a number of years, Thomas found himself bouncing between Boston and New York for gigs, including those with his long-time friend and collaborator, trumpeter Jason Palmer. Boston remained an indelible part of Thomas’s maturation, the place where he wrote and crafted much of his original music, including a number of pieces on Natural Habitat.

His arrival in New York led him to change his approach to music making, as his pieces began to open up, becoming more flexible for the expression of the people he began to play with. One of the first musicians Thomas began having regular sessions with was bassist Hans Glawischnig, who he met through Zenón and who happened to be his neighbor.

The supportive Glawischnig was a natural selection for Thomas as he began to establish a quartet to play his music. Pianist Julian Shore was a Boston contemporary, though he had attended Berklee School of Music, and an obvious choice for the group with his attention to the needs of a band. Drummer Johnathan Blake was a more recent association, but one that brought an unbounded freedom to the band’s performances.

The compositions on Natural Habitat underline the comfort that Thomas has in his abilities to write pieces of vastly differing styles and sounds.

The recording begins with “Float,” one of Thomas’s older pieces whose melody sails over a complicated but naturally carried meter in 7/4 and then 5/4. The gorgeous “Different Time” allows Thomas to demonstrate his bass clarinet chops on a lush jazz waltz. “First” comes from a series of pieces Thomas wrote for a 2017 performance; this bright piece bounds with energy from Thomas’s alto and a stunning bass solo from Glawischnig. The swinging title track really cemented the idea of this project, as it was during a Boston performance of the piece in 2018 that Thomas really felt grounded in his place, both his concept and destination.

The tricky “Harbor” emerged from concepts that Thomas had developed with rapidly switching meters and complex harmonies, a musical riddle that he solved on a long evening walk alongside of Boston Harbor. The delicate “Fourth” is a ballad from the 2017 series that begins extremely slowly but builds into a scintillatingly dynamic saxophone solo. “Demise” also began as a rhythmic mystery, this time a lopsided 13/8 piano feature that Thomas shaped by adding bass clarinet and bass accompaniments.

Thomas wrote “No Words” as a freely played piece that he imagined someone could sing, the lyrical piano lines leading to Thomas’s pliantly emotive sax. The recording concludes with “Two Cities,” a piece Thomas wrote while bouncing between New York and Boston for a group of musicians who split their time between the two cities. The dancing piece has two opposing sections that are a study in contrasts and highlight the composer’s ability and breadth.

Though Boston helped shape Michael Thomas, it has been New York City that has allowed him to refine his craft and approach. Natural Habitat highlights Thomas’s dexterity as a musician and composer with an ensemble of that would make any soloist feel right at home.