No One Is Any One

by Ember with Orrin Evans 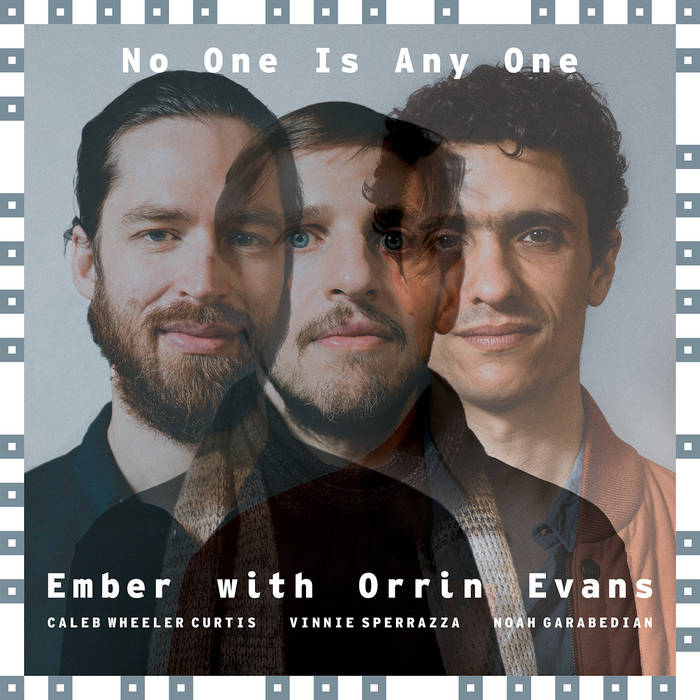 Music making is enhanced when the music is made with friends. The ability to involve peers who are experiencing life in a similar way makes communication and organization more natural. The Ember band is composed of three Brooklyn based jazz musicians and comrades. The group’s new recording, No One Is Any One, shows that the bond and aesthetic that the members have built is solid yet expandable, with the addition of pianist Orrin Evans for a handful of tracks.

Ember came together in 2017 when saxophonist Caleb Curtis, bassist Noah Garabedian, and drummer Vinnie Sperrazza began to assemble at rehearsals that would become as much conversations on music and values as actual playing. The members realized quickly that their openness and stylistic breadth led them quickly to a place of comfort in performance, their deep relationships leading to their understanding of musical needs and inspiring hopes of further development.

Garabedian and Sperrazza came from backgrounds in grooving, instrumental R&B music, while Curtis was more devoutly in the jazz world. The Brooklyn jazz scene provides a hospitable, if maybe under-recognized, scene of musicians who can reach across genre boundaries to make creative music.

Ember’s initial recording, New Year, came out under the names of the three members in 2018. The group’s first thought for recording was to approach the process casually, perhaps recording an album of standards. Instead, the members decided to write their own music, music that felt like standards rather than the overly complicated exercises that many in their community focus on. Ember wanted their music to be approachable in their everyday, musical life. Tunes that they could return to as part of their own canon.

A South Arts Grant in 2019 allowed Ember to tour and be clinicians for two weeks. The musicians developed a new set of music for the tour and committed it to memory, so that they would be naked on stage. Just the music and the possibilities within. Ember had intentions of recording the new material in March 2020 when the pandemic struck.

After months of isolation, Curtis, Garabedian, and Sperrazza began to meet in Brooklyn’s Prospect Park in impromptu rehearsals as performances. The organic nature of the meetings and the group’s desire to move forward led them to set up a recording at the Samurai Hotel studio at the end of July.

Curtis invited his friend and frequent collaborator Orrin Evans to join the group on the recording session. The involvement of Evans could be seen as an intermingling of two musical scenes, as the Philly based pianist has become well known for his post-bop inflected original music and for becoming the Bad Plus’s second pianist. But, in reality, it was a mutually beneficial arrangement that solidified Ember’s aesthetic and accessibility.

The recording begins with Curtis’s “Reanimation (Zombie Tune),” a tongue in cheek piece with a humble but rocking bassline from Garabedian, the ear taught tune establishing Ember’s sound identity immediately. Garabedian’s solo bass introduces his “Josephine and Daphne,” a piece inspired by Jack Lemmon and Tony Curtis’s characters from Some Like It Hot, who find meaning in their lives when they adopt female personas to be in an all-woman jazz band. The blues-forward sound of Sperrazza’s “No One Is Any One” finds its essence in simplicity; its title is derived from the writer’s discourse on, and eschewal of, the cult of personality. “Pilot Light” shows another element of Ember’s identity, composing in real time through collective improvisation.

Curtis’s sharp and snappy “Glass House” is inspired by woodwind legend Thomas Chapin’s groundbreaking trio, the song approximating the group’s ability to balance chaos and fragility. Curtis’s mesmerizing “Peace of Deoxygenated Sleep” comes from his hour-long piece, Bottom Feeders, and is meant to mirror the quiet at the bottom of the ocean. Orrin Evans’s gorgeous sound adds additional resonance to the weight of the piece. Evans returns on Curtis’s “Thomas,” another unsettled, attention grabbing piece that once again channels Thomas Chapin’s fearlessness.

Written in a sudden burst of inspiration in a 15-minute span, Sperrazza’s “Graceful Without Grace” is a thoughtful piece that reflects on the Protestant idea of God’s grace being inherent. Garabedian’s “Chia-Sized Standing Desk” is evocative of something never heard before, an experimental composition that shows Ember’s appreciation for the AACM’s meditative sound worlds. The recording concludes with Sperrazza’s “Harvey Pekar” from his suite called One Day, the composition taking its name from the well-known jazz critic who had a talent of finding beauty where there usually wasn’t any.

The depth of the band Ember’s collaborative energy and understanding are eye and ear opening. Caleb Curtis, Noah Garabedian, and Vinnie Sperrazza create music that is inspirational and meaningful on their new recording, No One Is Any One.