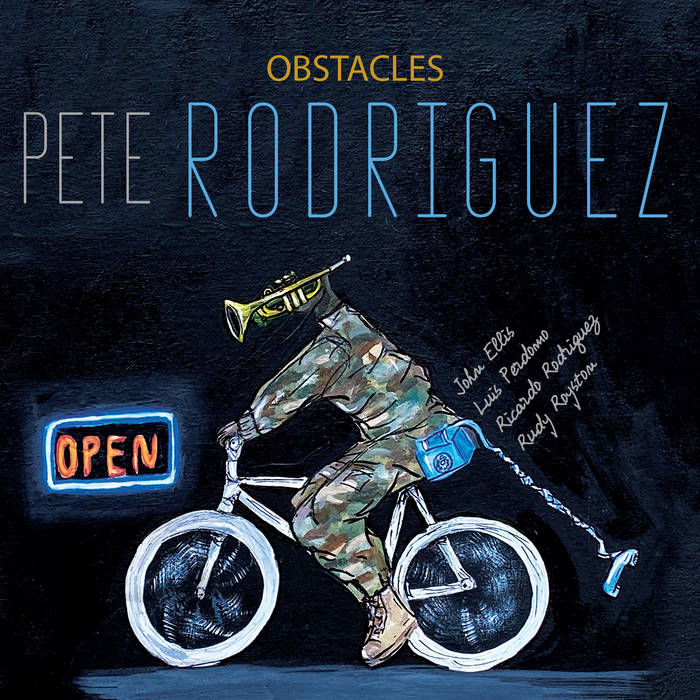 Life is a journey filled with ups and downs. The trials and tribulations the traveler encounters shape his or her personality and relationships, determining the kind of person he or she is. It is healthy to measure both the positives and the negatives, as even bad things can eventually work for the good.

Trumpeter/composer Pete Rodriguez has had an eventful life. Born in New York and raised in the Bronx and Puerto Rico, Rodriguez, son of the famed salsero Pete “El Conde” Rodriguez, has been ensconced in music since birth. His love for music set him on a path to make it his life’s work, whether through performing or teaching. Rodriguez’s new recording, Obstacles, was recorded as a way to confront his obstacles and working through them in a healthy way, by channeling his emotions and feelings into art.

Before college, Rodriguez spent four years in the army and then moved to New Jersey, where he attended Rutgers University in the 1990s to broaden his musical base into the realm of jazz music. Instructors like bassist Larry Ridley, pianist Kenny Barron, guitarist Ted Dunbar, trumpeter William Fielder, and saxophonist Ralph Bowen were instrumental in building both his love for jazz and his chops. At the same time, Rodriguez began to perform professionally in the vibrant salsa scene, which he had already become well immersed in because of his father and his Godfather, Johnny Pacheco.

While living in New York, Rodriguez familiarized himself with many of the local jazz players, but it wasn’t until he was on his first tour with Eddie Palmieri that he met pianist Luis Perdomo. It would be a couple years until he and Perdomo became fully acquainted in the City. It was Freddie Hubbard who had told Rodriguez that the most important thing in picking a band would be to have a good rhythm section. Having already found a great pianist, he asked Perdomo who else he would suggest.

Perdomo suggested drummer Rudy Royston, a true monster behind the kit, and they also brought in bassist Ricky Rodriguez, who the trumpeter already knew could handle any music put in front of him. Already familiar with the rest of the group, saxophonist John Ellis fit in perfectly as a counter voice to the leader’s trumpet. From there, Pete Rodriguez never needed to look to other musicians for his ensemble and made a number of recordings featuring derivations of this group.

Growing up in the City presented many challenges for a Latino; Rodriguez was regularly profiled by police. In 2000, his father passed away, which led Rodriguez to stop playing trumpet for three years. His work as a physical therapist assistant led him to meeting high level runners and bicyclists, activities that he would adopt and that would bring him out of his depression. The birth of Rodriguez’s daughter led to fluctuations in his family’s life and his practice routine, something that was difficult to adapt to. Rodriguez and his family moved to Austin, Texas ten years ago. He took a teaching job at a local State University, where he faced a number of hurdles and individuals who got in the way of his success and eventually led to his dismissal.

All of these events could have taken a real toll on Rodriguez, but he decided to use them as inspiration. He began to compose pieces that conveyed his feelings about situations and individuals who stood in his path. The resulting pieces were composed and presented to knock down another stigma he faced as a Latin American jazz player, frankly, that he could only play Latin jazz. Obstacles is a straight-ahead jazz album that swings with the best of them.

Recording was its own challenge, as Rodriguez had to fly the band to Texas and put them up locally. The group was only able to rehearse briefly before they put the music to tape. Rodriguez’s trust in, and the incredible ability of, these musicians insured the beauty and strength of the music they put down.

The recording begins with “50,” a contrafact of John Coltrane’s “Moment’s Notice” that Rodriguez wrote to celebrate his 50th birthday and that shows his penchant for visualizing his playing in line with that of a tenor saxophonist. The modal “Abraham” takes its name from the work of inspirational speaker Esther Hicks, who promotes positive thinking to reach goals. Rodriguez is hot and cold in his estimation of this model, he reflects that in the piece by remaining meditative and allowing the other members to solo, including a lovely turn on Rhodes by Perdomo. The snappy “El Proceso” came about when Rodriguez challenged himself to write a tune a week for six weeks while hosting a local jam session. The piece was built upon and built upon, until during one performance, Ellis suggested to play the melody up an octave, thus continuing the composing process.

The brief “Academic Backstabbing 101” is written with the character of a former mentor turned backstabber in mind, done here by eschewing improvisation (the individual in question can’t) and lithely playing over a piece inspired by Chuck Wayne’s “Solar” (a tune the individual believed was the most difficult in the jazz lexicon to play). “Mi Ritmo” is a lively attempt to make Thelonious Monk proud without being imitative over set rhythm changes. The lovingly composed “Triple Positive” is a tribute to a close family friend who passed away from breast cancer, her positive and loving spirit living on in Rodriguez’s warm trumpet melody.

The title track is based on Gigi Gryce’s “Minority” as played by Rodriguez’s hero, Clifford Brown. Melodies on top of melodies maintain the intensity on “Obstacle,” a reflection of tension and message of the tune’s inspiration. The warm tones of Perdomo’s Rhodes set the scene for Rodriguez’s “Someone Else,” a lovely, winding ballad. The aggressive “Mary Dick Ellen” is a musical smudge on a former colleague who used racist tropes when dealing with Rodriguez, so he uses her musical limitations in response. Rodriguez uses the same method on the quasi-blues, “FU Jon,” the unrelenting bassline chasing the detractor while Rodriguez abstains.

Pete Rodriguez has found a perfect, therapeutic method to get beyond the troubles that he faces. He makes music to confront it. Obstacles is a tremendous example of putting negative energy to use to generate positive (and extremely listenable) results.