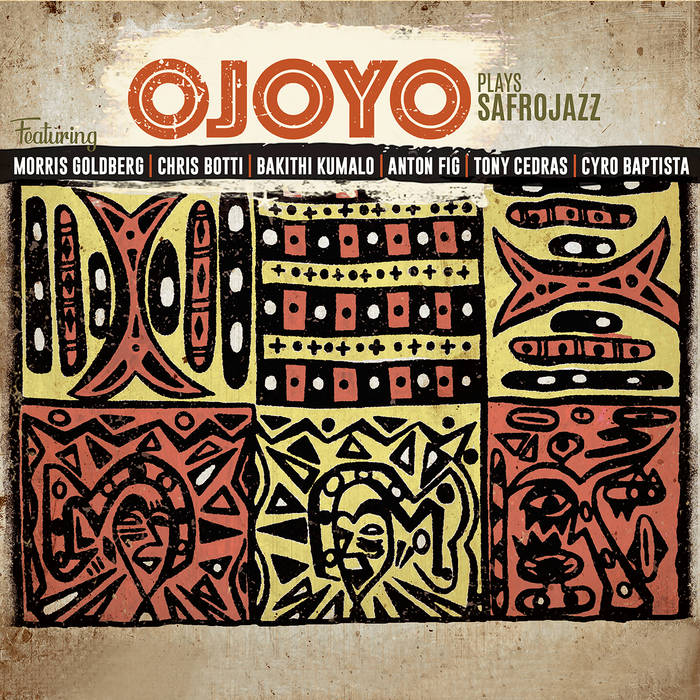 johnguth i played on it and love the band!

Saxophonist, penny whistle master, and composer Morris Goldberg is perhaps best known for his association with Hugh Masekela. In 1996 he formed the first version of Ojoyo, a group that features his often-celebratory compositions, folk-like melodies that, like the songs of Abdullah Ibrahim, pay homage to his roots in South Africa. The catchy rhythms which are often irresistible, Goldberg’s memorable themes, and the atmospheric ensembles are quite accessible yet, due to the leader’s alto and penny whistle solos and the contributions of his sidemen, music is creative and has its surprising moments.

Ojoyo Plays Safrojazz introduces nine Goldberg originals. Whether it is the attractive groove of “Station Road Strut,” the excellent Botti trumpet solos on “Forward Motion” and “Little Song,” the very appealing harmony between the leader’s alto and Botti’s trumpet on “Harare,” the cinematic “Madagascar,” Cedras’ inventive piano solo on “Little Song,” or the hard-swinging “Rockwela,” the music of Ojoyo is a consistent delight.

Morris Goldberg was born and raised in Cape Town, South Africa, learning from an early age how to blend together bebop with music that reflected his African heritage. He made his recording debut in 1959 on a quartet date led by pianist John Mehegan, one of the very first jazz sessions recorded in South Africa. A few years later, Goldberg moved to the United States without ever forgetting his roots, attending the Manhattan School of Music. He started working with Hugh Masekela in 1965, an association that lasted for decades. Goldberg also regularly performed and recorded with Miriam Makeba and Harry Belafonte (1980–88), was part of Paul Simon’s famous Graceland album (playing the iconic penny whistle solo on “You Can Call Me Al”), was featured on The Rosie O’Donnell Show on television (1996–2002), and recorded with Abdullah Ibrahim, guitarist Rodney Jones, and on an album by guitarist-singer Hans Theessink in Germany that also included Maceo Parker and Pee Wee Ellis.

In 1996 Goldberg formed Ojoyo as a vehicle for his compositions and solos and the group continues in the present time. The timeless music of their classic recording, Ojoyo Plays Safrojazz, which is distributed by Sunnyside Communications Inc, still sounds fresh, infectious and lively today.