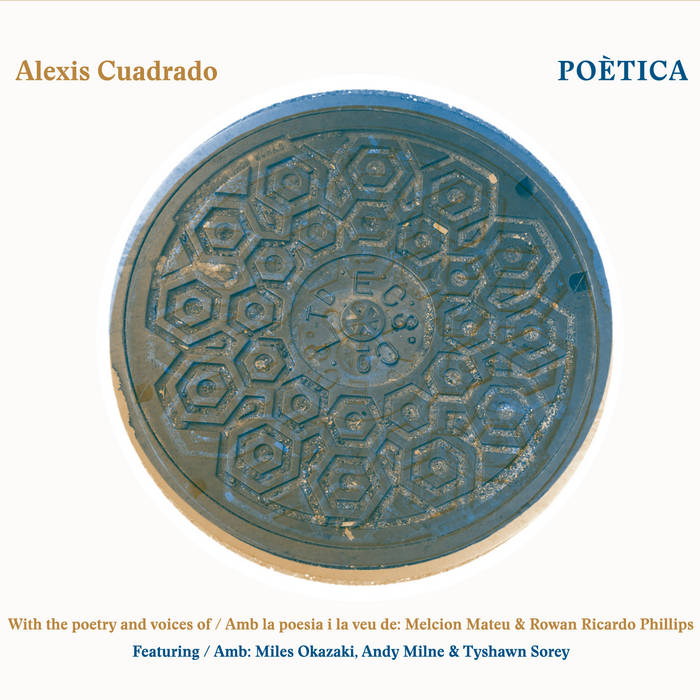 Antoni Pizà, musicologist and scholar, writes in his liner notes for POÈTICA: '"The moment one learns English, complications set in," proclaims the sardonic, unreliable narrator of Felipe Alfau's postmodern novel Chromos, a work of fiction about a group of Spaniards negotiating the realities of their adopted country, the United States. The "Americards," as they are referred to in the book, are neither full-fledged Americans, nor (tragically) Spaniards any longer. Their in-betweenness is their most salient feature and the source of their elated, often insane, meditations.'

The music of Alexis Cuadrado could be understood as an exploration of that same idea. The bassist/composer's new recording, POÈTICA, available on Sunnyside Records on May 20th, was preceded by two albums dedicated to the exploration of issues of cultural dislocation. With Noneto Ibérico (2011) he investigated the sonorities that result from adapting certain traits of flamenco and avant-garde classical music to the language of jazz. Then, on A Lorca Soundscape (2013), Cuadrado's first recording incorporating words and voice, he paid homage to the Spanish poet and his celebratory, lyrical evocations of New York City hybridity in the early twentieth century. Cuadrado has also set to music, Chaplin's classic silent film, The Immigrant (2015).

Now, with this stunningly adventurous new album, POÈTICA, which represents a massive creative leap, Cuadrado creates a multilingual tapestry involving texts by two critically-acclaimed contemporary poets: Melcion Mateu (who writes in Catalan, but living a life in which he is often speaking Portuguese, Spanish and English), and Rowan Ricardo Phillips (a native New Yorker, and translator of Catalan literature). POÈTICA also features the extraordinary talents of Miles Okazaki on guitar, Andy Milne on piano and keyboards, and Tyshawn Sorey on drums; three artists who rank among the most forward thinking creative forces in jazz today.

On POÈTICA, the audience/listener is taken through various sonic spaces, composed or freely improvised, built around the poems, written by Mateu and Philips. The voices of these poets are the de-facto front line of this "jazz sextet", creating a moving performance that translates the emotion of their poetry into a unique listening experience. The effect is powerful and stirring, as Cuadrado's music, embodying the confluence of jazz, Flamenco and New Music, combined with Philips' and Mateu's lightning-bolt expression, conjures vivid images with a fully present, personal voice.

Cuadrado, Mateu, and Phillips exploit to the fullest, the advantages of dislocation, distance, and cultural imbrication. Settling in a new country, learning new customs and a new language can be a monumental challenge, but the reward for the true artist is an immense awakening and liberation of one's creative spirit, evidenced on POÈTICA.