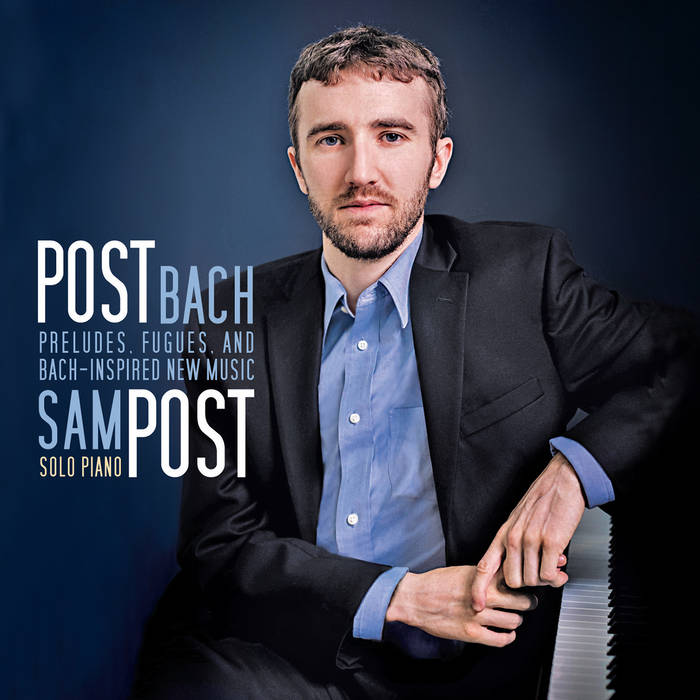 Pianist Sam Post has been a Bach acolyte since his earliest years behind the keys. His study and development have led Post down many musical avenues, but Bach’s lessons remain ever present in his work, as can be heard on Post’s new release, Post Bach, a collection of the pianist’s unique interpretations of a number of the maestro’s preludes and fugues, as well as original pieces that blend Bach’s harmonic ideas with syncopated styles that have become Post’s focus of late.

The Washington, DC based Post has been lauded for his brilliant piano playing and his unique composing style, including that of his string quartet and chamber symphony commissioned by the San Francisco Symphony. Post was steeped in classical piano from early in childhood, and his teacher Irena Orlov encouraged the young pianist to take on one of the most difficult of Bach’s Prelude and Fugues, the C Sharp Minor from the Well-Tempered Clavier, Book 1. From there, Post was hooked and set out to master all of Bach’s piano works.

Post became more and more engaged in music with strong rhythmic drive and with strong syncopation. His transcription of a Gabriela Montero rag improvisation led him to writing his first ragtime piece. Post also experimented with the music of William Bolcom, using two of the composer’s pieces as basis for improvisations on his last solo album. The infectious rhythms of other syncopated styles, including tango, swing jazz, and pop, have also engrained themselves into his work.

Post Bach is a tremendous collection of solo piano pieces that illustrates this musical shift. On the recording, Post performs four of Bach’s Prelude and Fugues but with an approach that emphasize his new-found approach to the piano. There are also a number of original pieces that display Post’s range in these styles, all with hints of his devotion to Bach’s harmonic concepts.

The program begins with Post’s “Tango Toccata,” which starts with the popular Argentinean milonga rhythm and weaves increasingly complex counterpoint and syncopations, driving to an intense climax. Bach’s Prelude and Fugue in C Major is taken at an unconventionally fast pace to show a hidden, rhythmically dynamic side of the piece that is lost in its typically slow performances. The Prelude and Fugue in C Minor is one of Post’s favorites despite being considered a student-level piece by many. Post plays it vigorously, highlighting a style of articulation in the Fugue that emphasizes the subject’s rhythmic elements. Post’s effervescent “Efficiency Remix” takes James Scott’s 1917 rag as a base and develops it in a way reminiscent of a Bach toccata, with an extended sequential section in perpetual motion with conflicting rhythmic cycles.

Post’s “Lighthouse Rag” is a contemplative, swinging rag that shows harmonic complexity and a sense of introspection Post likens to the work of Shostakovich. The walking bassline in the opening accompanies two voices in dialogue in the right hand. The piece further unfolds with a 3/2 meter unusual to the genre but nevertheless maintains the ragtime feel. Bach’s Prelude and Fugue in C Sharp Minor was one of the first that Post tackled early in his studies, the five voiced fugue being one of the composer’s most difficult. Post flies through the Prelude in D Major and plays the stately Fugue gorgeously. The recording concludes with Post’s own Prelude and Fugue in C Sharp Minor, which he wrote on the passing of, and dedicates to, his teacher, Orlov. His piece is an homage to Bach’s and is suffused with melancholy in reaction to Orlov’s passing in 2018.

Sam Post has been able to take his influences and adapt them in the most effective ways. The pianist’s love of Bach is clear but doesn’t stiffen his interpretation of the great composer’s work. Post Bach showcases the dynamic shift that he has been able to take as he approaches these time-honored pieces, as well as the individuality of the music Post composes himself.