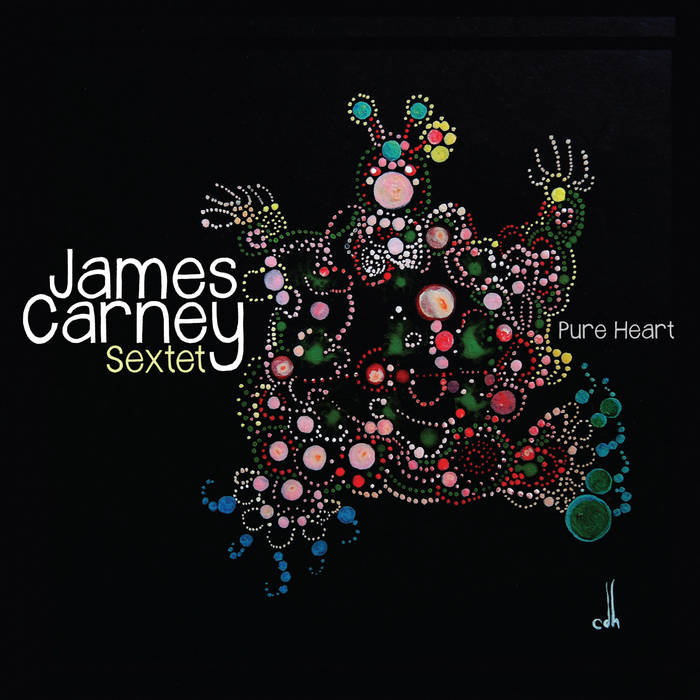 The combination of concept, effort and the right collaborators typically leads to good things no matter what the goal might be. These elements are especially integral to cohesion within a musical ensemble in performance, especially a group built of musicians who haven’t previously played together. Pianist/composer James Carney was thinking along these lines when he came up with the idea and chose the musicians for his new recording, Pure Heart.

Carney has been a long time mover on the jazz scenes on both the West Coast and the East Coast. Originally from Syracuse, New York, Carney went to California to study and graduated from CalArts in Los Angeles. He remained there working as a musician and composer before relocating to New York in 2004. His connection to the scene deepened as he began to host the popular Konceptions Series at Korzo in Brooklyn.

Because of his long reach across the continent, Carney has maintained close ties to many incredible musicians. It was while walking in Prospect Park in Brooklyn that the pianist came up with a lineup of musicians that he wanted to put together. None of the players had spent more than a cursory amount of time performing together, except for the two duos.
Carney has been no stranger to mid-sized ensembles and had even recorded a couple of septet albums. For Pure Heart, he wanted to scale down a little to three horns, which would allow a bit more flexibility and openness for the musicians to shape the music. The size allowed for much of the compositional complexity and also allowed a bit more in rhythmic and harmonic development.

The sextet that Carney put together is quite an assemblage. For the horns, he recruited his longtime friend and saxophonist Ravi Coltrane, bass clarinetist and alto saxophonist Oscar Noriega, and recent collaborator and trumpeter Stephanie Richards. Bassist Dezron Douglas and drummer Tom Rainey met in their first time ever pairing. In fact, most of these players had never played together before, except Coltrane and Douglas and Noriega and Rainey.

The pieces that Carney wrote for the sextet were well conceived but left room for stylistic interpretations from the players. Carney understood that with all of these special conceptualists and stylists that it would serve the music best to allow them to bring their personalities to the service of the pieces. Carney wrote the pieces with his conception of counterpoint through interlocking rhythmic parts and tried to make any
bit of abstraction have its own logic. The results exceeded his expectations and have kept him busy writing similar material ever since.

The recording begins with the loose-jointed “Inharmonicity,” which takes its name from a phenomenon known to piano technicians concerning the deviation of partials from the frequencies common in piano strings. The melody uses wide intervals and the rhythms are staggered to illustrate the deviations that can occur through tension and release, much like the intonation on the tightening of a piano string. The propulsive “Throwing Shade” was written by imagining what Carney’s hero, Horace Silver, would compose like if he were a contemporary. The piece goes from traditional jazz structure to Bartók-like openness to completely free in a hard-biting style.

The asymmetrical 31-measure song form of “Mayor of Marcellus” is never abandoned, even as the members of the ensemble stray for solos, grounding the piece in a winding groove. The beautiful “Forty Year Friend” was written for Carney’s friend with whom he had kept up with since a he was a child and who succumbed to brain cancer. The soulful piece, that is filled with wrenching ebbs and swells, was written weeks after the death. The recording concludes with “Gerrymandered,” a piece that features plenty of unison lines in the horns over a pedal point, which allows for some extremely evocative soloing.

The goal of putting a group of his friends together to play music that resonated with feeling was James Carney’s intention for his brilliant recording, Pure Heart. The results glow with purpose built from care and camaraderie.