Revenge Of The Cool

by The Bobby Spellman Nonet 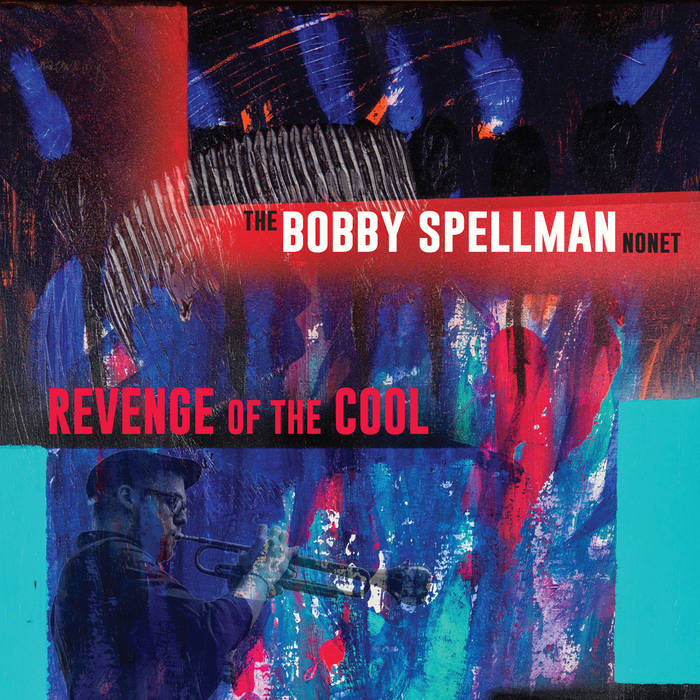 88dixon The shimmer of the cymbals, the full-spectrum bass tones on "Isles of Langerhans", and the delicate mix for the horns on the intro of "Boundless Love" all say "modern hi-fi recording". This is hardly some attempt to recreate the mid-fidelity sound of a Capitol Records 78 rpm platter. Enough about sound quality...what matters is the music, and Spellman delivers some great writing here. A+. Extending the tradition and the nonet palette.

Sven B. Schreiber (sbs) The sound of this album is a bit flat, probably with the aim of making it sound like an old recording. In fact, on my first contact, I wasn't sure if this is a re-release or something new. While I regret this obvious self-restriction, I'm more than excited about the musical expertise of composer Bobby Spellman and all members of this ensemble, which comprises an interesting selection of instruments: Trumpet, trombone, french horn, tuba, alto and bariton saxophones, plus piano, bass, and drums. Favorite track: At The Brink.

rmccaffr Well arranged and executed. They nailed everything they were going for. Just beautiful.

In 1948, the revolutionary sounds of bebop music were at their peak. Not far from the 52nd Street nerve center of jazz music a small group of forward thinking musicians were conceptualizing a new sound that would use the harmonic sophistication of bebop along with the compositional complexity of classical music. From loose sessions held in composer/ arranger Gil Evans’s basement apartment on 55th Street, the phenomenon that would become known as “cool jazz” was born.

These experiments were eventually immortalized when recording sessions from 1949 and 1950 were released as Miles Davis’s Birth of The Cool in 1957. More than fifty years later, when young trumpeter Bobby Spellman purchased a CD of these recordings, he became enchanted with the music. Spellman’s fascination with these performances led him to chase that same spirit for his own collection of nonet recordings, Revenge of The Cool.

Born and raised near Boston, Spellman was attracted to the experimental jazz scene that flourished in the city. After earning a degree in philosophy at Ithaca College, he went on to earn a Master’s degree in jazz trumpet performance at the New England Conservatory, where he had continued his study of boundary pushing musicians who worked there, including Ran Blake, George Russell and Steve Lacy.

Spellman has been based in Brooklyn since leaving NEC, leading different ensembles in a variety of genres. His infatuation with the music from Birth of The Cool remained with him after he left school, as he looked to find the reason for the mysterious compulsion toward the music. Spellman found after studying the scores that much of the attraction came from the unique colors and textures that were generated by the unique mid-sized ensemble along with the unique compositional style that lent itself to both jazz and classical styles, prefacing the Third Stream movement that would come soon after.

The nonet is an ensemble size that offers much for an enterprising composer. There is flexibility not present with big bands, though still maintaining the abundant opportunities for harmonic complexity that the larger ensembles proffer. Spellman began to write for this aggregation and found himself leaning toward the Birth of The Cool instrumentation, featuring French horn and tuba heavily, two instruments that were particularly tricky to write for.

To build his nonet, Spellman looked toward many of his NEC peers, including baritone saxophonist Tyler Burchfield, bassist Andrew Schiller, trombonist Tim Shneier and pianist Eli Wallace, along with pianist and Lydian Chromatic professor Ben Schwendener. Spellman’s wife, alto saxophonist Emily Pecoraro (who is featured on the first track), introduced Spellman to French horn player Kyra Sims, whom she met in New York and who shares the duty with her friend Justin Mullens. Tubist Ben Stapp, alto saxophonist David Leon and drummer Evan Hyde were other New York additions to the group.

The music began to take shape when Spellman was able to find a bi-weekly residency/rehearsal for the nonet in a Brooklyn restaurant. He then began to find other performance opportunities in Brooklyn, including The Owl Music Parlour, Scholes Street Studio and Shapeshifter Lab, allowing the ensemble to add material and flesh out their pieces during rehearsal.

The compositions that Spellman presented to the ensemble were intended to recapture the experimental nature of the initial Evans basement work. When analyzed, the pieces for Birth of The Cool can be dense and very avant-garde. It was the juxtaposition of well thought out melodic writing and complex, and occasionally dense, arrangements that made the music so intriguing. Spellman added elements of coordinated free improvisation to the mix.

The recording begins with the lush “Ghosts of Gainsborough Street,” a tribute to NEC’s legacy in the creative music world that was especially inspired by pianist Ran Blake’s more romantic approach to composition. The slow building “The Isles of Langerhans” uses two opposing sounds, one traditional and the other contemporary, and tries to find commonality between them. The aggressively swinging “At The Brink” uses composer Charles Ives as a guide as Spellman introduces a melody in one key and then another in yet another key before bringing them together. The beautiful “Boundless Love” is a tribute to Spellman’s wife and his e orts to create something worthy are gorgeous.

The spirited “Uncle Chip” is a brilliant piece of free-bop and the most recent composition for the group, written for a friend’s generous uncle. The title of “Certainty for Uncertainty” comes from Fela Kuti’s drummer, Tony Allen, and is a metaphor for the turbulent but frequently glorious life of a itinerant musician, the chord structure of the piece always playing close to the brink of destabilization. The lively “Genesis” is for Spellman’s mother, a free spirited artist who enjoys Afro-Cuban music, thus the dancing 12/8 rhythm. The program concludes with “The Human Condition,” a blues that connects the ensemble to the roots of jazz and allows the leader to flex on his slide trumpet.

The supposed cool school that emerged after the experimental works of Miles Davis, Gil Evans and others during the late 1940s has remained a touchstone in the development of jazz post bebop. The nature and spirit of the work was embedded in the study and play of Bobby Spellman, who was able to spin his love for this sound and reintroduce it with his fantastic nonet on his new recording, Revenge of The Cool.