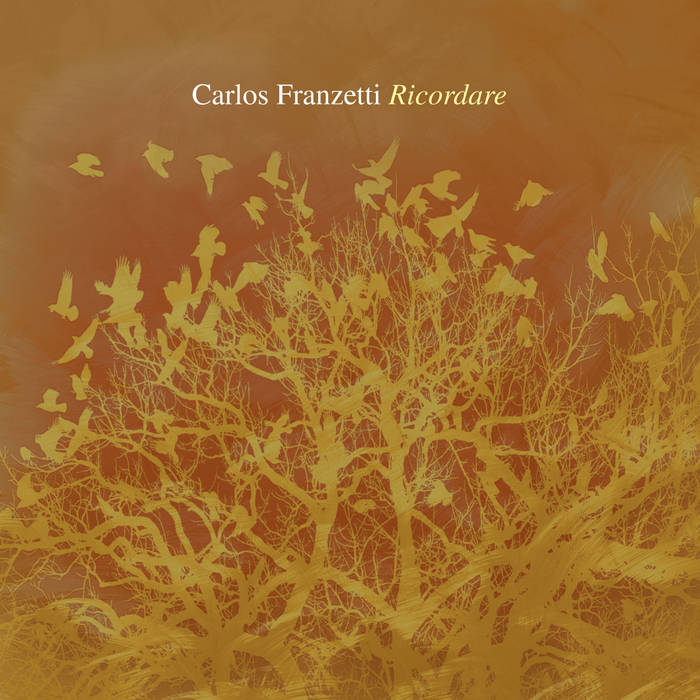 Sometimes the best way to keep music fresh is to approach it from another angle. Pianist/composer Carlos Franzetti has made a career of approaching jazz from his own perspective, creatively adding music elements of his Argentine heritage, mostly notably tango, and classical music for his own unique sound. His interest and work scoring films has also led to a cinematic quality in his work overall.

Franzetti’s new recording, Ricordare, takes all of these elements, namely his original compositions, film music and jazz standards, and throws them together with the aid of new trio for an off the cuff recording session. The music made with bassist David Finck and drummer Eliot Zigmund is fresh and inspired, as the recording marks the first time the trio has played together.

The recording’s title means “to remember”; the session is a memento of where Franzetti’s career has taken him. There are a few points of departure, however. Franzetti’s recent projects have been of larger scale with orchestras playing his original compositions and arrangements. Ricordare is more of a stripped down jazz record in the classic tradition of bringing in material and recording to capture a moment in time. The other element is the ensemble. Franzetti has worked with Finck for nearly three decades while this is the first playing time he has had with Bill Evans alumni, Zigmund, who impresses with his depth and tasteful interplay. Franzetti also chose to record material outside the standard repertoire.

The title track is by Ennio Morricone and comes from the film A Pure Formality, masterfully performed here for the first time in a jazz setting. Launched by Zigmund’s drums, “B.A. Express” is a Franzetti original that he originally wrote for the ‘80s fusion group, French Kiss. It is played here with a swinging zeal. One of his first compositions, Franzetti’s “Sausalito” pays homage to his hero Claire Fischer’s harmonic choices and melodic intervals.

Originally from the film Diva, Vladimir Cosma’s lovely minor key waltz “Promenade Sentimentale” is a wonderful showcase for Finck’s fine bass playing. Of course, Ned Washington’s “When You Wish Upon A Star” is unmistakable, the Pinocchio classic is remade here in an innocent dancing swing with intriguing harmonic shifts. The group’s take on the traditional “Danny Boy” begins as a lilting example of Franzetti’s fantastic piano touch before it lifts off with the addition of Finck and Zigmund.

Francis Lai’s score to A Man and a Woman is well known but the tune “L’Amour Est Bien Plus Fort Que Nous” remains an infrequently played piece. The trio begins on the composition’s waltzing 6/8 form but indulges Franzetti’s detours into music from other parts of the classic score. Written for his classical pianist wife, “Allison’s Dance” is named for her cute, jesting dance steps. Both played solo, Harold Arlen’s “Over The Rainbow” is done in a rhapsodic style while Franzetti’s “Song Without Words” is quietly introspective.

Carlos Franzetti wishes to return to his roots on his new recording, Ricordare, as the pieces recall images from his past that continue to linger.