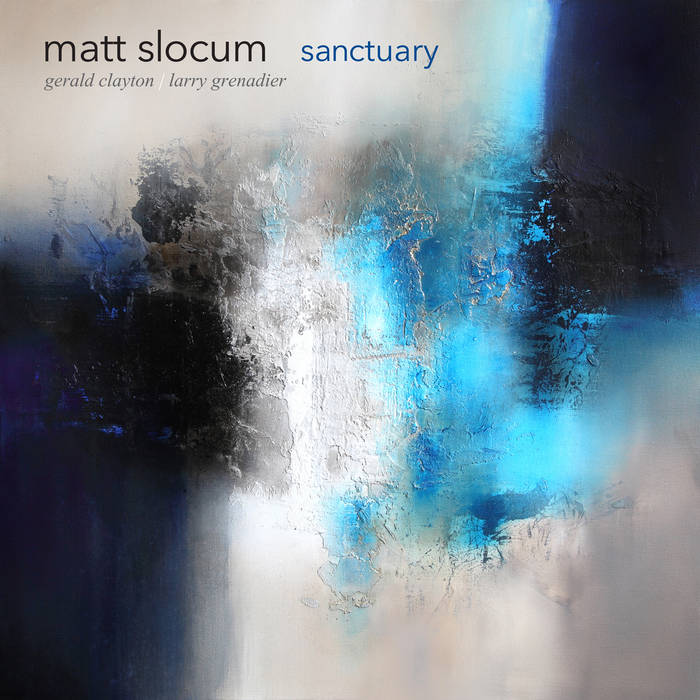 On Sanctuary drummer/composer Matt Slocum unleashes lovely, inspiring missives that could compel you to imagine a world in which peace, kindness and solace prevail – his music comes from an unsullied place, where the music is all that matters. And, he has a sound! An inviting, burnished sound as pure and effervescent as water streaming from high peaks that reveals itself as much through his compositional output as it does through his choices behind the drums.

Slocum is also a conceptualist and an instigator, traits which have produced five acclaimed recordings of mostly original music, including the gem you hold in your hands now, Sanctuary (available on Sunnyside Records on May 31, 2019), four of them featuring the great Gerald Clayton on piano (a friend and musical partner for almost two decades), and Sanctuary being the first to feature first-call bassist Larry Grenadier (a modern-day giant known for his 25-year association with the Brad Mehldau Trio, as well as consequential engagements with Pat Metheny, Paul Motian, Charles Lloyd, Joshua Redman, and Mark Turner).

The three protagonists on Sanctuary, recording after a single rehearsal, listen and interact on such a high level as to give the impression that they’d internalized the music after a long tour – a credit to Slocum’s leadership. “Matt always focuses on the melody and beautiful writing, and the forms are obvious and smooth. The song, the composition and melody is the most important thing, which is why it’s fun to play with him. He has a very strong foundation in the tradition, super-hard-swinging but still modern,” said long-time collaborator and bassist on Slocum’s first three recordings, Massimo Biolcati. Also notable on Sanctuary is the programmatic quality that underpins the proceedings. It’s definitely an ALBUM — the tunes connect emotionally, they cohere into a narrative arc. “Usually I have in mind a specific instrumentation and group of musicians before I write and arrange music for a project, so that it becomes tailored to that configuration and musical aesthetic,” Slocum says. “Here, for the first time, I took a different approach. I allowed myself to write whatever I felt like without those preconceptions. This seemed to make me reflect musically more on what I’d call places and characters that, at one time or another, have provided a perceived sense of creative refuge and even a feeling of home. That’s why I’m using the title, Sanctuary. I’m struggling with the new reality since January 2017, which I’m sure had some influence on it.”

More about the music on Sanctuary (with excerpts from the album’s liner notes, by Ted Panken):
Sanctuary opens with a haunting treatment of “Romulus,” from the visionary singer-songwriter Sufjan Stevens’ 2003 album Greetings From Michigan. “The lyrics are heartbreaking, and it’s a beautiful piece of music,” Slocum says. “The challenge was to find a way to arrange it without lyrics, where so much of the story is carried.” The performance begins and ends with gripping statements by Grenadier, whose sound just drips of humanity and all of its joys and sorrows. Clayton probes the tune’s dark undertones over Slocum’s tasteful cadences.

A crisp, pithy drum fanfare launches “Consolation Prize,” Slocum’s expressively swinging, reharmonized contrafact of Irving Berlin’s “The Best Thing For You” that provokes creative solos from all members, who converse with energetic simpatico and mutual intuition. Titled for an island of aspen trees in the middle of a swamp near his childhood home, “Aspen Island” is based on Frederic Chopin’s “Prelude in E-Minor.” After the ensemble develops the theme, Grenadier uncorks a sparkling variation on the melody, before handing the baton to Clayton, who reinforces the aura of wonderment attendant to the song’s subject.

Responding to Slocum’s relaxed, brushed swing beats, Clayton takes his time while developing the lovely melody of “Star Prairie,” named for the small village contiguous to Slocum’s childhood home, not far from Wisconsin’s western border. During third grade in the nearby town of New Richmond, Slocum took his first piano lessons, as mandated by his middle school for students who wanted to play percussion. By high school, Slocum was studying in Minneapolis with the excellent drummer Phil Hey, who introduced him to a slew of recordings propelled by the drummers who continue to influence him. Although Slocum soft-pedals his prowess on the drums, his learning curve was sufficiently steep to earn a scholarship to the University of Southern California, where he studied with Peter Erskine, and met not only Clayton and Biolcati, but present-day tenor titans Dayna Stephens and Walter Smith, III (who play on Slocum’s superb Black Elk’s Dream, from 2014), as well as generational contemporaries like Harish Raghavan, Taylor Eigsti, and Ambrose Akinmusire. Slocum graduated in 2004, and remained in Los Angeles until 2007, gigging with pianists Josh Nelson and Bill Cunliffe, and developing his compositional chops.

Melancholy and ominous, “A Dissolving Alliance” elicits the album’s most open-ended performance. “It’s along the lines of ‘Romulus’ in depicting a broken sanctuary,” Slocum says. “But there’s still beauty in the darkness.” He characterizes the tune “Days of Peace” (and its placement in the track order) as, “intended to create the illusion of a daydream- a mood of playfulness and warmth through a flashback to a brighter time before everything became seemingly lost and broken.” Slocum first documented this composition on Black Elk’s Dream with a very different treatment.

On the title track, whose melody invites a lyric, Slocum’s subtle postulations complement Clayton’s erudite harmonic probes. In distinction to the other tunes on Sanctuary, he says, it’s based “not on a specific place or character, but on an overall sense of places where I felt comfortable creating and on people who’ve supported that process.”

The final selection, “Anselmo,” is another memorable melody on a form that morphs from a long stretch of 4/4 into a tom-tom based 6/4 passage. It’s named for a key character in Ernest Hemingway’s iconic Spanish Civil War novel For Whom The Bell Tolls, which Slocum re-read not long ago. “How that character deals with his sense of home and being part of the resistance there is interesting to me,” Slocum says, before elaborating on his attitude towards interpreting his music in real time on the drums. “I write a lot of tunes without even thinking of a meter, until I record myself playing it on piano,” he says. “Then I make a 5-bar phrase or a 3-bar phrase because that’s where it feels like it wants to breathe, not because it’s a hip jazz thing or it’s unusual to do. You can practice for hours, months, years before the session, but at the end of the day, it depends on what the other musicians do – and if you want to let them be themselves, you have to be open in that moment.”

Slocum’s explication of his compositional m.o. illuminates why Sanctuary continues to stimulate after multiple listenings. “I’ve been moving closer to developing a voice where my influences aren’t conspicuous,” Slocum says. “This is definitely the most personal recording I’ve done thus far.”