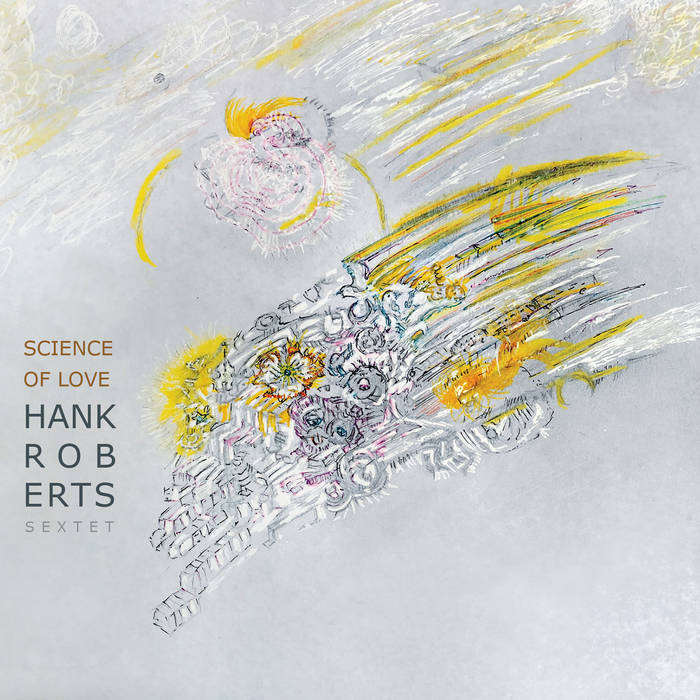 Creation can be a lonely process. The meticulous crafting of art frequently requires isolation for focus, but the process can be aided by the spark of a change of location or meeting new collaborators. Cellist/composer Hank Roberts believes that the acts of creating and sharing music help bring positivity needed to balance the world. In essence, bringing more of a particular life-sustaining energy into the world, namely, love. How better to spread love than through enthusiastic participation with friends in artistic endeavors?

Roberts’s new recording, Science of Love, finds the longtime stalwart of the creative Downtown music scene returning to New York City, after raising a family in Ithaca, NY, in an effort to rekindle the vital, creative energy that only the metropolis can provide. Roberts discovered inspiration in droves, which allowed him to create a unique program of original music unlike anything he had done in the past.

Of course, Roberts has been well known for playing alongside music greats, like Bill Frisell, Tim Berne, and Joey Baron. He has also put together singular and celebrated ensembles of his own that cover a wealth of musical ground, including folk, rock, modern classical, gospel, and world music influences.

In the summer of 2015, Roberts decided to return to New York City. A renewed sense of urgency in creation had struck him and he felt that his burgeoning work should be heard. The pieces heard on Science of Love were already begun prior to Roberts’s arrival but they really blossomed as soon as he began to fit himself back into the rhythms of the City. Immediately, he was seized by inspiration and found himself awakening at 4AM to compose, attaining a near sensual experience as he set his ideas to paper.

It didn’t take long for Roberts to begin meeting invigorating new collaborators. Trombonist Brian Drye was one of the earliest, as Drye asked Roberts to perform with his group at a local concert. Woodwind expert Mike McGinnis and pianist Jacob Sacks were musicians Roberts had been following and with whom he quickly established ties. Drummer Vinnie Sperrazza was introduced by McGinnis, and he met violinist Dana Lynn while performing with her in another group.

The assembly of what would become the Hank Roberts Sextet was entirely organic, evolving out of chance meetings, preexisting friendships between members, and a quick understanding of the leader’s goals. All of the musicians shared similar languages, interacting comfortably between jazz, improv, and classical musical idioms. The group proved to be a perfect size for the emerging music, a reasonably sized ensemble that could sound large.

As a former trombonist, Roberts has always been attracted to the instrument’s possibilities (as can be heard on his debut solo album, Black Pastels) and Drye’s impeccable playing aligned perfectly with the composer’s ideas. The combination of trombone with cello and piano allowed Roberts to experiment with low pitch clusters, unique phrasing, and intonation, all of which brought a lot of energy to the music through their natural tension.

As the music for Science of Love began to emerge, Roberts was reflecting on the energies at work in the world and in the universe, from the wind rustling leaves in a tree to the consciousness shared between all human beings. His takeaway was that love was an important power in the universe and that artists are proponents in spreading that power through their work. These thoughts manifested in Roberts’s desires to push his work farther and to step into a more active role as a conduit for expressing these feelings.

Roberts’s initial phase of composing these pieces began by constructing series of chords or small melodies and expanding them day after day into larger frameworks. His level of focus propelled him into another level of preparation. Roberts’s move to New York and assembly of his Sextet brought the project full circle, as he had a regular outfit for rehearsals and performances where the pieces really began to bloom as he continued to sculpt them with the aid of the other musicians’ specialties.

Many of the compositions are extremely complex, the harmony and voicings meticulously arranged, extending farther and farther into organic abstractions, and balanced relative to traditional forms, as well. Even with this framework, Roberts wanted to maintain the instrumentality of improvisations. He created the materials but gave the performers the opportunity to more deeply clarify and expand their meanings.

The recording begins with “Sat/Sun Pa Tu X,” an amazing expansion of the piece “Saturday/Sunday” from Little Motor People (JMT, 1993) with a controlled added abstraction. “G” is a 14-piece suite of sorts that began as small piece that kept building. The titles reflect the codes that generated the pieces and, occasionally, descriptive elements of the pieces reflected by the performers. Among the many pieces, the leading “The Sharp Peak of The Science of Love” is a fantastic example of the breadth of the suite, with fantastic solos by Sacks and Drye that fit the drive of the music. Dynamic strings and close harmony highlight “Shifting Paradigms in Pre GLC 3,” while the slow “Shuffle of GLC Magnetic Floating Stripper” provides an intriguing dynamism for weaving the ensemble with McGinnis’s soaring soprano saxophone. The delicate “205” concludes the program with tart sentimentality.

A life change allowed Hank Roberts to undertake one of the most meaningful projects in his life. The journey may have begun as a move to New York City, but it evolved into something deeper, the fostering of new friendships and a new, collection of music. Science of Love is a testament to Roberts’s craft, perseverance, and ability to propel the power of love through music.