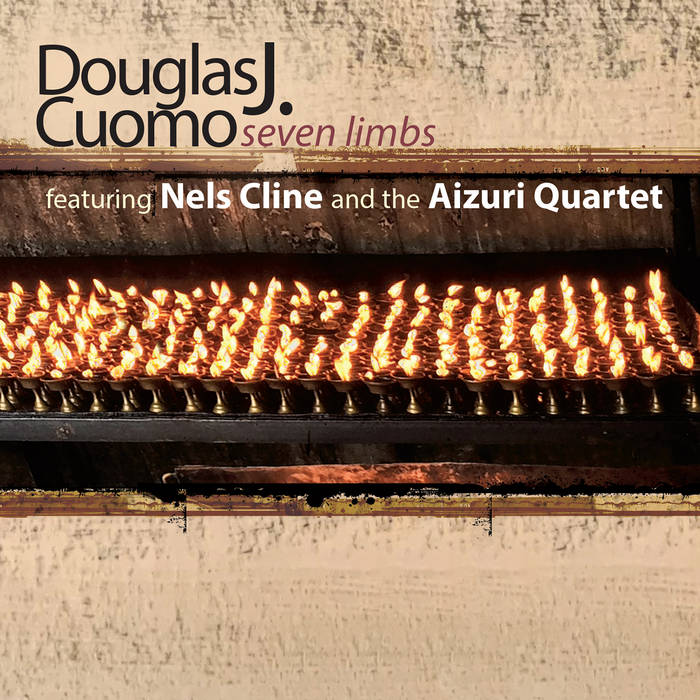 Composer Douglas J. Cuomo’s new piece, Seven Limbs, is unique and unusual. The suite features the simultaneous performance of inspired improvisations by guitar genius Nels Cline and meticulously-notated music performed by the Grammy-nominated Aizuri Quartet. Inspired by an ancient Buddhist prayer, also called Seven Limbs, it is music of great power that is put in service to a spiritual ideal, in the tradition of John Coltrane’s A Love Supreme and the music of Arvo Pärt.

Cuomo began his musical studies as a jazz guitarist, having studied at both Wesleyan and Miami University, but his interests led him away from instrumental performance to the world of composing, where he remained mainly self-taught. Cuomo found success in the early 1990s writing music for film and television, including the highly regarded drama series, Homicide: Life on the Street. After 15 years in the industry, Cuomo decided to step back and focus on composing for passion projects in theater and contemporary classical fields.

Also a practicing Buddhist, Cuomo writes describing why he choice to compose around the Seven Limbs: “The practice is about exploring your mind and facing what’s there. I tried to make the music reflect the same thing — stillness, turmoil, suppleness, resistance, euphoria, high drama. I wrote it to be like a dream, like looking inward and discovering a terrain.”

Seven musical movements aurally represent the seven parts of this particular prayer, namely: “Prostration,” “Offering,” “Confession & Purification,” “Rejoicing,” “Requesting the Turning of the Wheel of Dharma,” “Beseeching the Buddhas Not to Pass Away,” and “Dedication.” To illustrate the emotive depth of the practice, Seven Limbs presents a kaleidoscopic array of sounds and moods, evoking moments of meditative tranquility, battles with inner demons, and sudden, profound bolts of clarity. Like the mind, the music is by turns wild and unruly or calm and single-pointed.

The music on seven limbs was written specifically for Cline and the Aizuri Quartet, a string quartet composed of violinists Emma Frucht and Miho Aegusa, violist Ayane Kozaasa, and cellist Karen Ouzounian. Cuomo says: “I intended to allow Nels the opportunity to play in all the different ways that he does - explosively and delicately, with lots of electronic effects or totally acoustic. His range drew me to him for this project but equally important, even in his sonic mayhem mode, he is always wonderfully sensitive and reactive to what’s going around him musically. And the first time I heard the Aizuri Quartet, I was knocked out by their sound, precision, and rhythmic suppleness. They have such a beautiful musical and personal energy, and it just beams out at you from the stage. I knew I could write the kind of demanding music I was imagining and they would just eat it up.”

This is not the first time Cuomo has combined jazz improvisation with other musical forms. He is currently composing a major piece for saxophonist Joe Lovano and full orchestra to be performed next year by a number of major orchestras throughout the world. Cuomo’s two chamber operas written for the Brooklyn Academy of Music, Arjuna’s Dilemma and Savage Winter, both combine contemporary classical ensembles with improvising musicians from the jazz, North-Indian classical, and rock musical traditions.

“My goal for this kind of writing has always been to build a landscape that is slightly unfamiliar for all the players," Cuomo says, "where the ground is always shifting a bit in unexpected ways. I want them all to be able to do what they do best, but in a slightly different context than they are used to."

Despite being written and recorded during the COVID pandemic, Seven l\Limbs was a true collaboration. Cline and Cuomo met with instruments in hand to talk guitar sounds just before lockdown. Cuomo Skyped and exchanged written music and rough iPhone recordings with the Aizuri. Then in February of 2021, everyone assembled for rehearsal, three livestreams, and the recording of the piece. Though masked and socially distanced, the joy everyone felt to be in a room making music together after so many months of isolation was palpable and it shows in the recording.