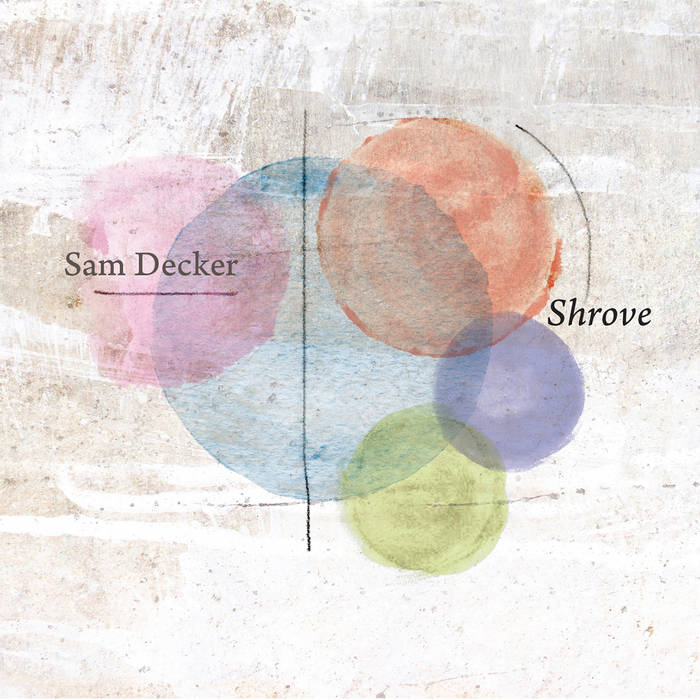 There is a misconception that freely played music must be melee, a literal free for all. Of course, that needn’t be the case as there are ways to direct improvisers with clear intent. It also helps to build trusting relationships with those recruited to perform the music in such a communal spirit.

Saxophonist/composer Sam Decker has focused much of his energy into purely improvised music. The Illinois-bred, Brooklyn-based Decker focused the past six years on developing music that blended his fascination with folk-inflected sounds of composers like Igor Stravinsky, Bela Bartok and Dmitri Shostakovich with the color and power of improvised music. The outcome is his first release that fits squarely in the jazz realm of composition meeting improvisation, namely, Shrove.

Decker graduated from the New England Conservatory of Music in 2010, whereupon he moved to Brooklyn and the burgeoning creative music scene. The next years held a diverse set of music projects and collaborations in the free improv scene as well as the indie/experimental pop scene. Influenced by all of these experiences, Decker was also beginning to write the material and build the ideas for this set of music which comes much closer to the jazz settings he spent so much time with earlier.

The initial writing began on Decker’s roommate’s Fender Rhodes electric piano. Decker knew that he did not want to write pieces with chord symbols for standard harmonies, leaving the paths to improvisation open to the musicians playing the pieces and their harmonic sensibilities. He also knew that he wanted to have just two to three melodic lines and, importantly, that one of the melodic instruments would be clarinet, an instrument that’s pure tone Decker was attracted to after hearing it’s role in Shostakovich’s works and those of other 20th century classical composers. Ultimately, he wanted to find a way to create simple pieces, without many of the complex rhythmic and harmonic trappings of contemporary jazz, that gave the improvisers freedom within an aesthetic.

Clarinetist Michael Sachs began his Masters degree program at NEC just as Decker left. The two met through a mutual network of musicians from the Conservatory and established a quick rapport, playing and collaborating in multiple projects. The two began playing Decker’s pieces together as he experimented with different instrumentations. Over time an ensemble emerged as a brilliant rhythm section of bassist Aryeh Kobrinsky and drummer Nathan Ellman-Bell were assembled. Eventually Dov Manski was added on piano, who has a fantastic harmonic sense and a mindful approach to ensemble playing that Decker knew would provide for more orchestral possibilities without taking up too much space. The group’s name was gleaned from the opening movement of Stravinsky’s ballet, Petrushka, providing the mysterious word meaning finding absolution for one’s wrongs, Shrove.

When the idea of recording began to evolve, Decker reached longtime friend Greg Uhlmann to produce the recording, and his recording experience and musical judgment was crucial in shaping the pieces once in the studio. Uhlmann and Decker used the months leading up to the recording to hone in on the specifics of arrangements, as well as clarify the tone of each distinct piece.

The pieces that Decker brought to the recording are original, simple pieces with sing-able melodies. The sound concept was to attempt to approach the singular sound of the second Miles Davis Quintet, a group that was able to transcend any musical material and find complete freedom regardless of framework. Communication between the musicians was key to achieving this. There were open discussions about the possibilities within the pieces. Decker also generated graphic scores to provide a framework for the development of the pieces, showing where tensions, textures and intensities should emerge or part.

The recording begins with “Filles,” one of Decker’s earliest pieces, chattering drums and parallel woodwind melody introducing a long Sachs solo that pushes to a sort of uncoordinated canon, ending with a slow, sad feel. Written on the subway by singing into an iPhone, “Stems” is a sedate meditation that builds murkily through a never-ending crescendo. The propulsive “ST” is a direct homage to Stravinsky and his “Soldier’s Tale,” the piece echoing a martial cadence while different sections exploding with new ideas and textures until everything is brought back with a quiet rubato ending.

The blocky, glacial melody of “What it Was All For” provides a framework for brilliant bass solo from Kobrinsky and the most harmonically complex piece on the album, featuring studio slowing techniques to achieve some distinctive drum sounds. “Iron Swallow” is an eerie ballad that emerged during the collaborative process of Decker and Sachs, the graphic score including the instruction to “fall into a black hole,” which is sonically achieved. “Falling Action” is an older piece that moves between an opening statement in sharp three part harmony, a lyrical piano solo, a noisy aggressive sax drum bass improvisation, and finally a repeated motif against the increasingly frenetic wall of sound that acts as a final cadence.

The simple melody between tenor and bass clarinet of “Tableux” sounds like the introduction to a scene, and the eventual piano harmonies juxtaposed against this the open quality brings to mind Olivier Messaien‘s colorful harmonic chromaticism. The recording concludes with “Parallel Floats,” the instrumentalists switching roles over short series of harmonies, finally building to an anthemic crescendo.

Sam Decker created a singular piece of freedom with design on his new recording, Shrove. Utilizing communal spirit, clear direction and an open mind, Decker provided distinctive compositions and fascinating sound combinations to an ever-expanding milieu of music creators who are bridging the gaps between jazz, chamber music and free improvisation.