by David Weiss & Point Of Departure 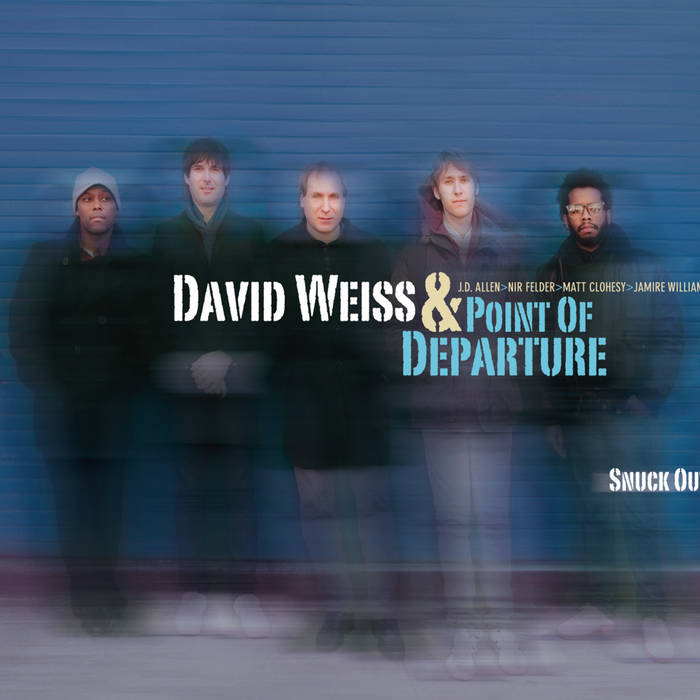 F. Scott Fitzgerald wrote that “there are no second acts in American lives.”

In 2010, the New York-born Weiss, and his formidable ensemble –consisting of J.D.Allen on tenor saxophone, bassist Matt Clohesy, guitarist Nir Felder and drummer Jamire Williams – released Snuck In, the group’s critically acclaimed Sunnyside debut, recorded at the Jazz Standard on March 25, 2008. The follow-up CD, Snuck Out, consists of selections from the group’s second set from the same night, featuring the music of Charles Tolliver, Charles Moore, Wayne Shorter, and one selection composed by the leader.

“Point of Departure for the most part, performs continuous sets with each tune morphing into the next so each set is more of a complete statement than a collection of individual tunes,” Weiss says. “This is how we wanted to present this music on these two CDs, live, just as it naturally unfolded in the club that night.”

Weiss, a fearless improviser who is well-versed in the modern trumpet tradition – from Freddie Hubbard and Booker Little to Don Cherry and Woody Shaw - and co-founder of The New Composers Octet, aurally illustrates his approach to jazz ensemble improvisation by breathing new life into these sixties-era selections, thanks to Williams’ light-speed drumming, Clohesy’s sure-footed basslines, and Felder’s twangy and textured guitar lines. The opening number, “Revillot,” is one of Charles Tolliver’s oldest pieces, and was released on Jackie McLean’s album, It’s Time (dig Allen’s sly quote of Ornette Coleman’s “Lonely Woman.”). “Charles is one of the people who showed me the light and got me in the mind set that made this band possible, Weiss says. “Strive to be the best musician possible, always move forward and do it with passion and conviction. Go for the jugular and mean it.”

Weiss and company’s fifteen minute-plus excursion on the Detroit wunderkind Charles Moore’s “Gravity Point” is named for the composer’s ingenious use contrasting 4/4 time, with 3/4 sections, followed by a syncopated, spirited take on Wayne Shorter’s “Paraphernalia,” with Felder throwing in Thelonous Monk’s “Well, You Needn’t.” “[This composition] might be the tune that started this language that the group leans heavily on,” Weiss says. “Charles Moore told me the album Miles in the Sky, and particularly this tune strongly influenced him and the group he was involved with, Kenny Cox and the Contemporary Jazz Quintet. This tune has a cuing system and three different sections to go between; two for the soloist to work with and a sort of interlude to break things up. The possibilities are endless.”

The medium tempo, straight eighth-y “Hidden Meanings” is the lone selection composed by Weiss. “I wrote this for my sextet and recorded it on my CD The Mirror (it's called “Nostalgia” there), Weiss says. “I always had J.D.'s tone in mind when I wrote this tune and I was happy to add it to the book for this band so I could finally have him play it. Of course he delivers here just as I expected....” The CD concludes with another volcanic version of “Snuck In.” “It’s sort of our theme song (we closed both sets with this tune which is why it's on both CDs),” Weiss says. “This is another tune by Charles Moore. It is basically in two sections. A vamp section and another section which is in 4/4 but with a few bars of 3/4 inserted here and there to create that rhythmic contrast described above again.”

Creating cutting-edge jazz with contrast and cohesion has been David Weiss’s modus operandi ever since he appeared on the scene in the late eighties, when he established himself in the Big Apple as a versatile sideman with everyone from Bobby Hutcherson, Curtis Fuller and Jaki Byard to Jimmy Heath, Tom Harrell and Christian McBride. He also arranged for many other stars including Abbey Lincoln, Phil Woods and Freddie Hubbard. In 1996, Weiss formed The New Jazz Composer’s Octet, which recorded five CDs: First Steps into Reality (Fresh Sound, 1999), New Colors (Hip-bop Essence, 2001), Walkin’ The Line (Fresh Sound New Talent, 2003), On The Real Side (Times Square Records, 2008) and The Turning Gate (Motema, 2008). Weiss’s own CDs as a leader include Breathing Room (Fresh Sound New Talent, 2001) and The Mirror (Fresh Sound New Talent, 2004). He’s also composed commissioned pieces for the American Composers Forum's Jerome Composers Commissioning Program and the Chamber Music America Doris Duke Jazz Ensembles Project: New Works Creation and Presentation Grant.

Snuck Out is a daring and dynamic recording that captures an exciting jazz ensemble at the height of their improvisational powers. “We are trying to blur the lines between the composition and the improvising,” Weiss says. “The improvising is more based on the tune, more of a theme and variation thing than a head, solo, head thing so one can continue on after the melody has been stated and people can think it is still part of the melody or vice versa.”