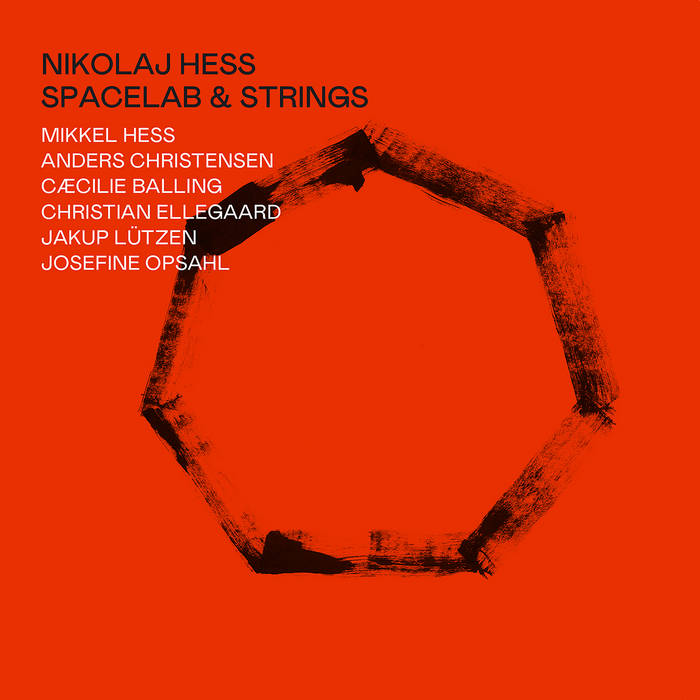 Collin Sherman I heard this first on apple music, and I liked it so much I decided I needed to own it. One of the best combinations of jazz and classical I've heard - always engaging and very, very cool. ECM Country sounds almost like a '60 Brazilian jazz cut, while Kontra Punk has a more aggressive twist that nods toward avant-garde harmonies, and Ravel Reflections nods to, well, Ravel, and yet it all ties together in a satisfying and consistent way. Very nice.

The piano trio is one of the most flexible and dynamic vehicles for musical expression within the genre of jazz. The same can be said of the string quartet in the classical sphere. The intimate confines of both ensembles lead to a fantastic blend of group interplay and individuality expressed by the performers. Boundless possibilities of musical pathways within these combinations have made these the de facto ensembles for composers and performers within these genres.

Pianist/composer Nikolaj Hess has found much to say utilizing the piano trio and the string quartet over his career. Recently, it was his idea to interweave a string quartet together with a piano trio to create a septet, thus multiplying the colors and dynamism of sound that can be produced. Hess’s gorgeous new recording, Spacelab & Strings, brings two ensembles from two musical fields together to amplify his artistic vision in a unique, sweeping way.

Hess grew up in the musically rich environment of the Jutland peninsula of Denmark. The area is well known for its rich musical legacy and was also a regular destination for touring jazz musicians visiting Denmark. Hess’s study of piano and violin gave him a wide exposure to classical and jazz music. Hess eventually settled on piano as his main expressive voice but continued to love the sound of the violin, even going as far as trying to emulate the violin’s sound on the piano.

While growing up, Hess developed long standing musical relationships with bassist Anders Christensen and drummer Mikkel Hess (who is also Hess’s brother). The regular partnership led to a trio that switched leadership depending on projects but has ultimately come to be known as Spacelab. The ensemble’s time-honed rapport makes it an ideal amplifier of Hess’s folk-inspired, Scandinavian-tempered music.

Butch Lacy and Horace Parlan were among Hess’s teachers at the Copenhagen Conservatory and the first to introduce Hess to arranging and transcribing his musical thoughts from the piano to strings (and thinking in orchestral sonorities on the piano. Hess continued to study the art of string writing, studying the works of greats like Beethoven and Ravel. Opportunities to write for strings sprang up in commissions and films over the years, which include Lars Von Trier’s Melancholia

Over the years, Hess collaborated regularly with violinist Cæcilie Balling, the leader of Strings, the quartet featured on this recording, and co-producer of this recording. The other members of the quartet, violinist Christian Ellegård, violist Jakup Lützen, and cellist Josefine Opsahl, are engaged in a wide variety of musical endeavors, from classical fare to improvised music, making the flexible quartet a perfect partner with Spacelab.

The recording begins with “ECM Country,” an austere piece that takes its title from a friend’s reflection on the Scandinavian landscape’s simplistic beauty and the legendary music label’s reflection of it. The melancholic “Piece” plays off its homonym with a melody which uses the American Blues’s penchant of developing tension for a stirring release. “Indigo Meadow” is a delicate composition reflecting a color in nature, reminiscent of Ravel’s work. The aforementioned composer’s Second Movement from his String Quartet is borrowed for “Ravel Reflections,” showing the reflective dimensions of the music when heard in a context different than its original, being able to live expressively in two musical spheres.

Tranquility is sought and found on “Adagio” as the tempered strings yield to Hess’s pensive piano, while “Trio2” seeks a place of freedom in play between the members of Spacelab. The winding “Seven Ate Nine” is a study in polyrhythms and chordal relationship, the odd meters and harmonic relationships creating an untethered feeling akin to the billowing wind over a desert. The title of “Danish Accents Lost In The Bush (In a Broke Down Yellow Volkswagen in Nigeria)” refers to a story that must be heard, about Hess being stuck in the countryside with Fela and Femi Kuti. The piece utilizes patterns adopted from traditional African rhythms along with a more Western chromatic melody, a true blending of musical cultures.

The unstable, bombastic “Kontra Punk” is an anti-counterpoint classical piece, while “Tinir” (meaning “your” or “yours,” here referring to sharing) is an adaptation of a piece that Hess wrote for a Faroese saga sang by three choirs, the folkloric feel lending itself well to the telling of a tale. The trio returns alone for “Trio1,” a beautiful, improvised reverie inspired by the music of composer Arvo Pärt. Hess captures the resonant essence of the celeste on the self-same titled piece, while he tried to capture the unique Scandinavian temperament that balances dark and light on “Black & White.” The piece balances major and minor tonalities, finding beauty within opposing sounds, as Scandinavian composers have done for decades. The recording concludes with the solo “Intro Exit,” a perfect ending and beginning for things to come.

Nikolaj Hess has found a way to capture a very particular Scandinavian identity on his compositions that walk the line between classical and jazz repertory. The cinematic breadth of his musical talents can be heard on Spacelab + Strings, a wonderful meeting between musical entities of tremendous expressive capabilities.