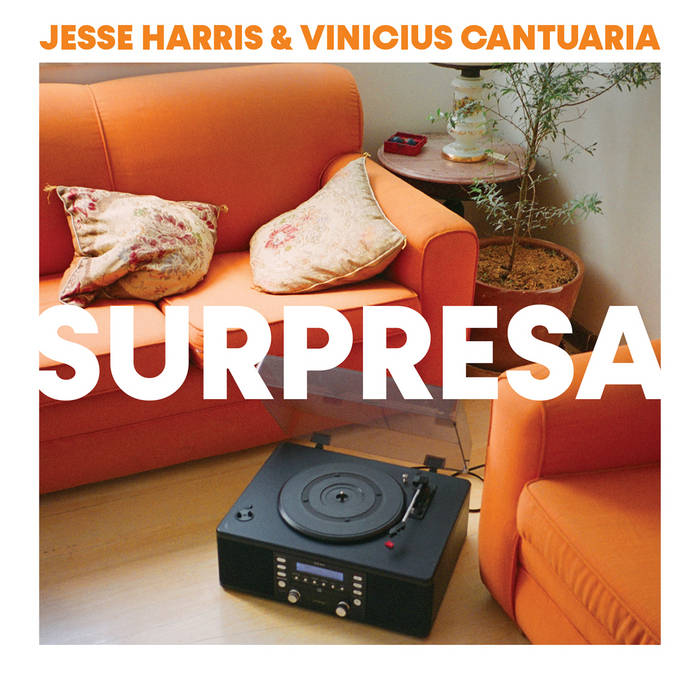 The past year found the whole world waiting. The COVID-19 pandemic paused life for most people and found everybody looking ahead to when life would return to normalcy. Singer/songwriters Jesse Harris and Vinicius Cantuaria took the time provided by the lull to record a project that had been evolving over the previous few years. Surpresa is the enchanting culmination of their efforts and it shows that some things are well worth the wait.

Both artists are well-known for their superior songwriting abilities. Harris came to the attention of the music world as a member of Once Blue and, later, writing hit songs for Norah Jones, Melody Gardot, Solomon Burke, and more. Beginning his professional work as a member of Caetano Veloso’s band, the multi-instrumentalist and composer Cantuaria has made a name for himself with his unique approach to the music of his native Brazil and his intriguing collaborations with artists as diverse as Ryuichi Sakamoto and Laurie Anderson.

Harris and Cantuaria initially met in 2011 when their mutual friend Dadi Carvalho introduced them, allowing Harris to stay at Cantuaria’s Rio de Janeiro home while Harris was in Brazil. Once he returned to New York, Harris visited Cantuaria and his wife Claire in Brooklyn. They struck up an immediate friendship and began hanging out and writing music. The writing eventually led to Harris inviting Cantuaria to play on gigs where they would incorporate each other’s songs and those of Tom Jobim into a working repertoire. Harris would go on to write “This Time” for Cantuaria’s 2012 recording, Indio De Apartamento.

It was about the time that they had decided to record together that the pandemic hit. Rather than becoming disillusioned, Harris began to ramp up his creative efforts. His home studio, Secret Sun West, allowed him to create any time he felt inspired to. When Cantuaria was able to finally return to the States, the two friends jumped immediately into recording Surpresa.

The majority of the tunes were written collectively, or separately by Harris or Cantuaria, with the exception of Gilberto Gil’s “Ó, Maria.” They recorded most of the instruments themselves, bringing in a handful of special guests to add to their work. Having worked with Melody Gardot for years, it was only natural that Harris invited her to add her vocals and a little piano. Guitar wizard Bill Frisell was also brought in to wonderful effect on a couple of tunes. Other guests included vocalist Gabi Hatmann, horn arranger CJ “CARM” Camerieri, percussionist Jeremy Gustin, and Will Graefe.

The recording begins with Harris’s folky “Waiting,” a wistful piece written about waiting for things to get better. Cantuaria wrote “Rio Negro” years back with the legendary Caetano Veloso and revisits it here in a cool, bittersweet style. Harris wrote “Far Away” as he watched planes flying over Gardot’s Paris apartment, missing places and people he’d love to visit. The first song the duo of Cantuaria and Harris wrote together, “How Long?” came together when the two friends were still in isolation, Cantuaria providing the music and Harris the lyrics, which ask the question that was on everybody’s mind during the Summer of 2020. The breezy yet resonant title tune follows on a positive note, the duo’s tune expressing the beautiful feeling of people coming together again, amplified by their collective voices and Gardot’s sonorous piano.

Taking inspiration from a photography book by Roe Ethridge, the duo’s jaunty “Broken Umbrellas” is about summer ending and its unfulfilled dreams. Gilberto Gil’s “Ó, Maria” finds Harris singing in touching Portuguese and Frisell adding his tasteful plectrum of strings. Frisell is also featured on Cantuaria and Argentinean composer Alejandro Corvalan’s “Colibri,” adding his typical haunting, bluesy touch alongside Cantuaria’s penitent vocals. Harris’s moving instrumental “Little Star” is revisited with the aid of Jeremy Gustin on percussion. Though it began as a Cantuaria instrumental, the bouncy “West Broadway Shuffle” finds additional charm with Harris’s guitar-doubling melody and lyrics. Harris’s “You, The Queen” is a song that Cantuaria loves to perform and it is a fitting end to their quietly poignant program.

It seems all too appropriate that Jesse Harris and Vinicius Cantuaria’s collaborative album, Surpresa, would have that uniquely Brazilian feeling of saudade. Their music and words could easily express the thoughts and feelings of the population as it sat and waited longingly for the world to start spinning again.