The Hue of Silence 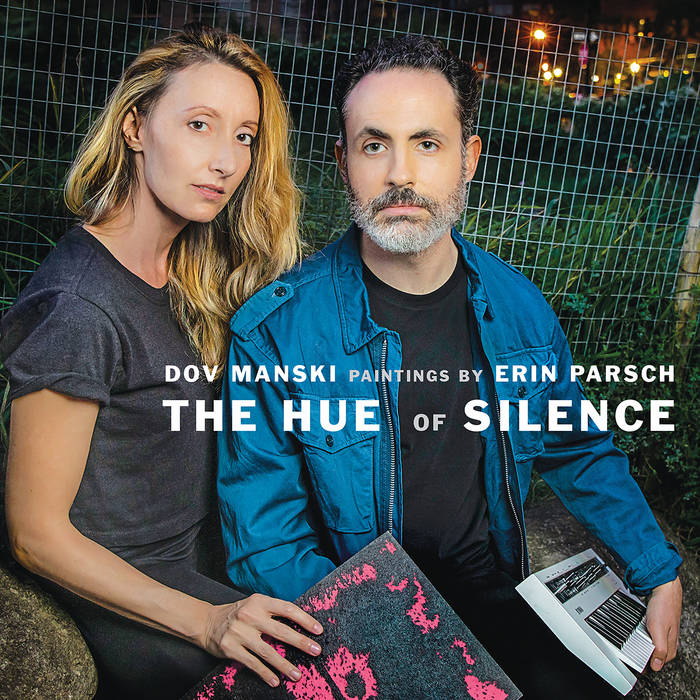 The visual and aural arts have likely been interconnected since the beginning of human artistic expression. Artists in both mediums utilize similar terminology to describe techniques, processes and aesthetics in their work. Keyboardist/composer Dov Manski and visual artist Erin Parsch began a partnership to explore the ways in which musical performance and painting can communicate. The Hue of Silence is their astounding multimedia project that shows some of their discoveries, centered around their response to color.

Originally from Maine, the Brooklyn based Manski has woven an eclectic career through jazz and contemporary electronic music since leaving the New England Conservatory of Music. His work as the primary pianist for the Erick Hawkins Dance Company led to his collaboration with Parsch, who was a dancer in the company. Parsch has studied dance, classical piano and art since she was a child. She continues to pursue these interests as a painter and performance artist.

The past two years found the pair discussing the meeting place of art and music theory. As their rapport grew, they began to experiment with different methods of performance, where Manski would generate the music and Parsch the visual elements. Utilizing their study and appreciation of the performative aspects in the creations of the abstract visual arts, they began to conceptualize a method to apply their mediums to live performance.

A handful of live performances allowed them to really explore different methods of expression. Their initial performance found Manski on amplified piano while Parsch reacted freely to the music. Rehearsal led to structured performance. A tonal palette was established and cues from both performers initiated. In their next performance, Parsch used a dancing technique of count memorization to help guide her actions, carving with a palette knife into paint, through Manski’s loose compositions played on Wurlitzer electric piano and electronics, a change that allowed for a widening of expressive possibilities.

The duo’s last performance was in February 2020 just before the world was shut down due to COVID 19. As the energy drained from New York City, Manski and Parsch made use of the time by advancing their concept and focusing on one facet central to art: Color.

For generations, composers and visual artists have sought to use color as a theme and subject for their works. Though neither Manski nor Parsch are synesthetic, they both feel strong reactions to the use of color. Parsch has always been interested in the history of color theory, as colors are natural, electro-magnetic spectrums finding themselves manifested in elements of the earth with such a dynamic range. Her interest led her to the question: “What does it mean to hear color?”

The Hue of Silence began to develop organically as the pair discussed color theory and how to express their discoveries. Manski took to electronic instruments to develop his own synthetic sounds. Having mastered the art, Manski found that the control allowed through the generation of synthetic sound was essential to this project, knowing that he had the tonal aspects right after long periods of trial and error. He began by considering a place where the color lived, perhaps in a memory or detail of a certain event. Then he tried to create music to accompany those times and places. Sharing a wall in an apartment, Parsch was able to listen to Manski’s compositional processes, inspiring her visual work. The constant dialog between their sessions kept shaping the project, which really only manifested at the end of their work.

There are two pieces of art for every title on The Hue of Silence: one visual and one aural. The pair chose specific colors as reference points and built alongside one another, informing each other of their progress, discussing and then revising. On a number of the audio pieces, Manski used the ratios of the Fibonacci series to structure events in the music, whether it be rhythmic patterns or harmonic changes.

Images of Parsch’s artworks are included in the package, showing her expressive interpretations in stunning color. As she wasn’t able to go to her studio, Parsch was left to the art materials that she had at home. Many of the pieces were then generated with the elements she had out of necessity. Parsch balanced her work between oil stick and acrylic ink on either cotton rag, yupo paper or fiberglass.

Pieces that were developed with oil on cotton rag, like “Egyptian Violet,” “Cobalt Blue,” “Mars Black” and “Warm Rose,” are spontaneous creations, as the oil stick seems like an extension of Parsch’s arm. Manski approximates that free expression with abstractly played soundscapes, quietly warm as on “Cobalt Blue” or expansively mysterious like “Mars Black.” Parsch enjoys the disruptive beauty of the acrylic ink on yupo paper and the texture it generates. The bubbling “Alizarian Crimson,” resonant “Malachite Green,” meditative “Carbon Black” and pointillistic “Cadmium Orange” mirror the fluid approach of Parsch’s visuals.

Together, the visual and audio components that combine to comprise Manski and Parsch’s The Hue of Silence are ethereally stimulating, creating a complex program that feeds the eyes and ears.