The Origin of Adjustable Things

by Joanna Wallfisch with Dan Tepfer 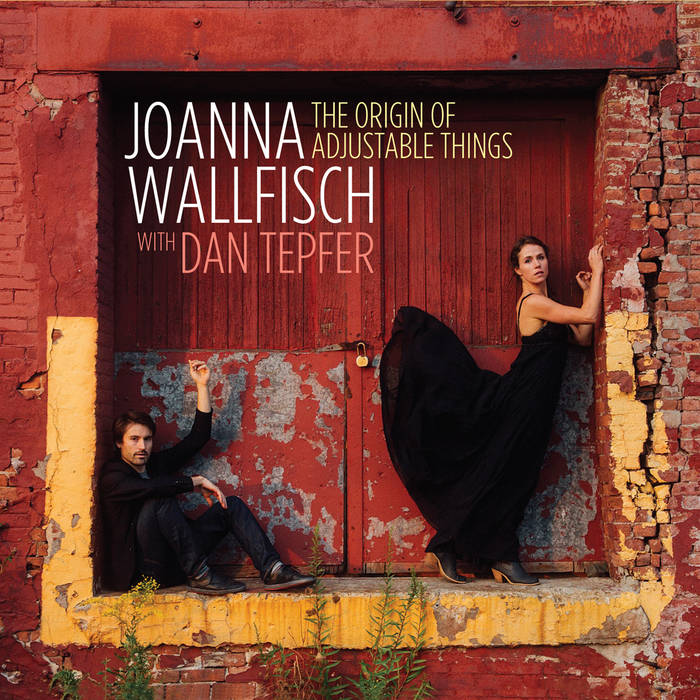 Hailed by the great Fred Hersch as “a real discovery—a first-rate musician in every way,” British vocalist Joanna Wallfisch has built an impressive profile since her move to New York from London in 2012. She takes a bold step forward in her creative journey with The Origin of Adjustable Things, a stark and expressive duo album with rising piano master Dan Tepfer. In the mysterious poetry of her lyrics, the freshness of her harmonic choices and the expansiveness of her sonic palette, Wallfisch sets a high bar as she and Tepfer explore a musical universe of their own making.

Wallfisch commands attention right away with the lilting 7/8 meter and wordless percussive line of “This Is How You Make Me Feel,” interweaving and harmonizing with Tepfer’s piano in an inventive dance. “This album is very much a result of the personal and musical connection we share,” says Wallfisch of Tepfer, who served as engineer on the main recording session as well.

Wallfisch also relates how working with Tepfer has “opened my eyes to certain things, the biggest being the very many ranges of expression within my voice, and allowing myself to be more vulnerable. The stage, to me, has always been a place of composure, confidence and assuredness. I’ve since let myself explore vulnerability and I’ve been surprised not only by how effective it is, but how natural it feels to be a little more open and raw, not only onstage but also in my writing.”

The layered vocals of “Satellite,” “Time Doesn’t Play Fair” and the title track reflect Wallfisch’s love of “plainsong and chant, close dissonance and harmonies. There is something so perfect, so pure about the voice harmonizing with itself, and this passion leads me to try and create sound-worlds in this way.” The piquant piano dissonances of “Anonymous Journeys” and a marvelously subtle harmonic twist in “Satin Grey” (on the word “stranger”) have a similarly haunting effect. On the brief title track, "The Origin of Adjustable Things," Wallfisch's vocal lines take on the dark, alluring quality of alto flutes, moving in lustrous parallel harmonies against a simple Wurlitzer pattern.

Just as enthralling are Wallfisch’s treatments of “Song to a Siren” by Tim Buckley and “Creep” by Radiohead, the latter arranged by Tepfer in a maze of changing time signatures. “The different phrase lengths really seemed to aid the lyrics and how I could interpret them,” Wallfisch says. “Siren,” a 1970 folk classic that found new life in the ’80s, entered Wallfisch’s repertoire through trumpeter Jeremy Pelt, who brought the singer on board for his soundtrack to the film All the Beautiful Things. “I fell in love with the song immediately. I’ve always wanted to be a mermaid! The lyrics are not easy to sing or to convey. I found myself singing both from the perspective of the siren and the spurned lover.”

There are two songbook standards as well, “Never Let Me Go” and “Wild Is the Wind,” the latter a vehicle for artists as diverse as Nina Simone and David Bowie. “It took three takes to get it,” Wallfisch says. “I remember right before we began the third take I popped my head out of the booth and said to Dan, ‘Just be the wind.’ Those were five magical studio minutes.”

“Brighton Beach,” with Wallfisch on piano and Tepfer on pump organ, is “nostalgic, playful, childlike, silly and true,” the composer says. Inspired by the Brooklyn locale as well as the ones of the same name in her native UK and her mother’s native Melbourne, Australia, the song has a circus-like waltz feel, with crashing dissonances out of the blue and even a fleeting reference to Beethoven’s Für Elise. The song captures another important side to Wallfisch, who’s been known to do skillful maneuvers on a trapeze while singing and playing ukulele onstage. Drawing on jazz, theater, dance, performance art and other disciplines in her budding career, Wallfisch conjures a music full of feeling and intuitive wisdom, pointing toward a propitious future. Nowhere is it clearer than on “Rational Thought,” where she sings with a cathartic and uncensored honesty, buoyed by Tepfer’s refined accompaniment in 3/4.

Hailing from an immediate and extended family of accomplished musicians (her mother a baroque violinist, father a cellist, one brother a film composer and conductor, the other an opera singer), Wallfisch earned a Masters in Jazz Performance from London’s Guildhall School of Music and Drama in 2012. She has since had the opportunity to work with Wynton Marsalis and the Jazz at Lincoln Center Orchestra as part of Chorale Le Chateau, directed by the Grammy-nominated Damien Sneed. Other notable collaborators include Finnish violinist Pekka Kuusisto, bassist Chris Tordini, vibraphonist/percussionist James Shipp, pianist Glenn Zaleski and drummer Colin Stranahan. In addition to her output as a solo artist, Wallfisch has done work for film soundtracks—her song "Satellite" features on new movie Pressure, starring Danny Huston, while other vocal and lyric credits include All the Beautiful Things, Desert Dancer, Dear Wendy, Summer in February, and also commercials (she’s currently the voice of the Hillshire Farm campaign).

Dan Tepfer has previous Sunnyside releases to his credit including Duos with Lee (with Lee Konitz), Small Constructions (with Ben Wendel), Goldberg Variations/Variations and Five Pedals Deep. Born in Paris to American parents, Tepfer has translated his bi-cultural identity into an exploration of music that ignores stylistic bounds. He is a recipient of the Charles Ives Fellowship from the American Academy of Arts and Letters and the Cole Porter Fellowship from the American Pianists Association. He has also taken top honors at the Montreux Jazz Festival Solo Piano Competition and the East Coast Jazz Festival Competition. Bringing together his undergraduate studies in astrophysics with his passion for music, he is currently integrating computer-driven algorithms into his improvisational approach.