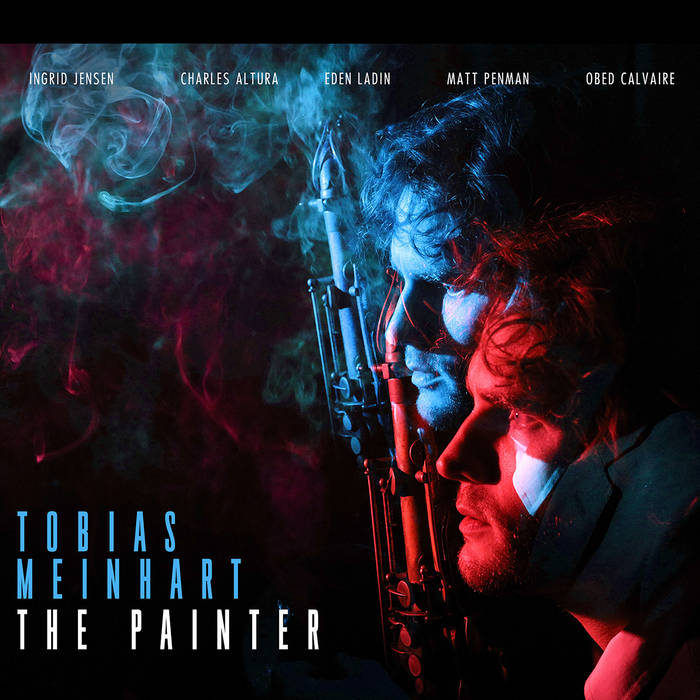 The creation of music shares much in common with creation in the visual arts. Both musicians and visual artists speak of and deal in colors, hues and textures in their compositional processes. Saxophonist/composer Tobias Meinhart has developed near synesthetic visualizations as he performs and hears music. His new recording, The Painter, presents his recent work of diverse, brilliant pieces meant to brighten the world’s canvas.

The German born Meinhart has engrained himself in the New York City jazz scene over the past decade. His beautiful tone and catholic tastes have allowed the saxophonist to fit into an abundance of musical settings. Meinhart’s vision and thoughtful composing have attracted top-flight collaborators since his professional beginnings.

The past year has provided a time of introspection and development for many. Meinhart is no exception. He found himself especially drawn to his friend, Igor Sokol, a painter. The two spoke of art and music, listened and appreciated and collected inspiration from the events that were affecting the world. Meinhart was drawn to the idea of composing and improvising as a sort of aural painting and he began to see colors and pictures when he reached a certain zone while playing.

With much to think about in craft and inspiration, Meinhart began to compose pieces that would be recorded on The Painter. The inspiration for the pieces drew from a number of sources: from the COVID-19 pandemic and the Black Lives Matter movement to meteors and Michael Jordan, all presenting hopeful messages of healing and progress.

The ensemble that Meinhart assembled to record these new pieces consists of a number of the saxophonist’s favored collaborators, including pianist Eden Ladin, bassist Matt Penman and drummer Obed Calvaire. Since his recent release and collaboration with Kurt Rosenwinkel, Berlin People (Sunnyside 2018), Meinhart has been drawn to the sound of guitar, thus the addition of his neighbor and friend, Charles Altura. These musicians, in this and similar configurations, have been the saxophonist’s regular associates on stages like the 55 Bar and Birdland in New York City over the past two years.

The frontline is completed by Meinhart’s longtime mentor and friend, trumpeter Ingrid Jensen. The two first met in Austria in 2003 at a jazz workshop, Jensen allowing the young saxophonist an opportunity to sit in with her band. They remained in contact in the subsequent years, performing together when opportunities presented themselves.

The recording begins with the offbeat “White Bear,” a rhythmically complex tune in 9/8 time that is named for Meinhart’s favorite dumpling house in Flushing, Queens, his last meal before the pandemic shut down New York City and, hopefully, his first stop once things return to a semblance of normalcy. A meditation practitioner, Meinhart uses the name of a famous koan, “Oak Tree,” for this thoughtful, slow piece that blends sax and trumpet in close harmony. The fervent “Movement” was written in May inspired by the Black Lives Matter protests and pushes a hopeful, forward thinking harmony akin to continuous circular motion that composer Kenny Wheeler was the master of.

A poignant bass solo by Matt Penman utilizes overtones from Meinhart’s written intro to the title track, the piece itself blooms insistently with piano and saxophonist’s haunting multiphonics and settles into a spare ballad. The bright “Bird Song” was written for Jensen and utilizes the song of the chickadee in a sort of call and response between trumpet and alto flute, Meinhart switches to tenor to strengthen the duet over the winding 5/4 pulse. Bruno Martino’s “Estate” is performed in a spare duet with pianist Ladin, the piece concluding into mysterious electric depths.

The waltzing “Neowise” takes its name from Earth’s recent alien encounter with a meteor of the same name, Meinhart’s tenor playing soaring into the outer atmosphere. Always a basketball lover, Meinhart was struck by ESPN’s recent Michael Jordan documentary. His “Last Dance” harnesses the spiritual essence of Keith Jarrett’s American Quartet and Archie Shepp’s ‘70s work for Impulse! The recording concludes with Meinhart’s most political state. “Dreamers” is a hope filled hymn for all of humanity, the saxophonist’s message being so important that he decided to express it in his own words and natural voice.

Sometimes an artist’s job is to mirror the world in his or her work. Sometimes it is their job to bring beauty and hope into the world. Tobias Meinhart takes a wide brush to the latter task on his fantastic new recording, The Painter.