Things Of That Particular Nature 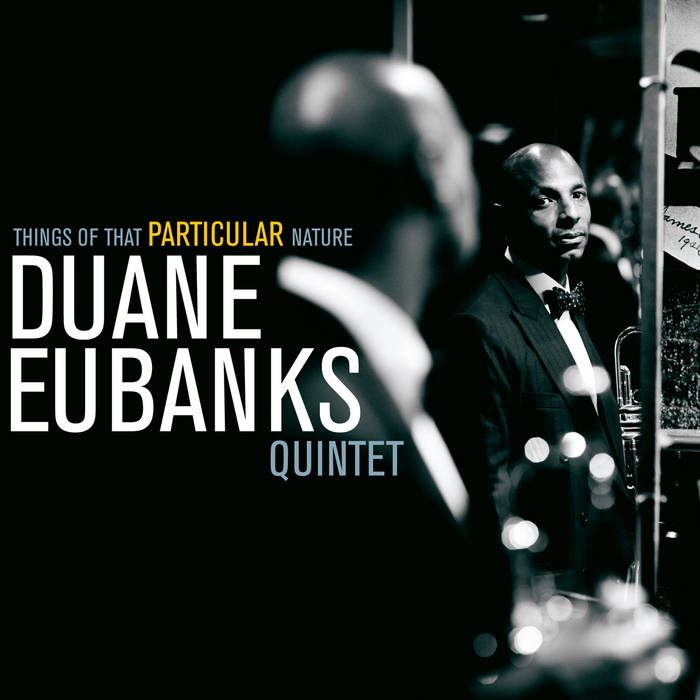 Sometimes all one needs to move along is a little prompting. With a bit of discipline, motivation and, maybe, a little help from the Universe, opportunities will arise and lead the willing to his goal.

Philadelphia trumpeter, Duane Eubanks is thankful for the motivation the Universe has provided him with and dedicates his new recording – Things of that Particular Nature – to his main influences and motivators: his father, his mentor, Mulgrew Miller, and his wife. These three individuals were the driving forces behind the creation of his new recording, Eubanks’s first in nearly a decade.

Eubanks was also fortunate to have strong role models while growing up. His father, William Eubanks, was stern and strong, a veteran and police officer, who moved through the ranks to detective, a rare feat for an African American man at that time. He passed his own moral compass and level headedness on to his four sons, three of whom became tremendous musicians with their father’s full support.

The late, great pianist Mulgrew Miller provided another brotherly role model for Eubanks as he began his career as a professional musician. Miller’s personality was much like Eubanks’ father’s, allowing their professional relationship to become more akin to that of mentor and friend. It was Miller’s advice and support that helped nurture Eubanks in becoming the musician he is.

Upon leaving Philadelphia, Eubanks made an immediate splash in the New York jazz world by forming his own quintet and releasing two recordings, My Shining Hour and Second Take (TCB Records, 1999 & 2001). From there, he began collaborating on projects with many diverse and highly respected musicians, including his brothers, Robin and Kevin, Elvin Jones, Dave Holland and Miller.

In the mid-2000s, Eubanks found himself at a crossroads with his own music. In Philadelphia, he had known all the musicians and was a part of their close community. In New York, he had yet to find that cadre of musicians he felt a deep connection with, players with a genuine love for each other and a common cause.

Eubanks had known and collaborated with drummer, Eric McPherson, for a number of years. McPherson helped forge a relationship with saxophonist, Abraham Burton. It wasn’t until Burton invited Eubanks to sit in on a gig that featured bassist, Dezron Douglas and pianist, Marc Cary that the trumpeter truly felt at home with a group. Eubanks knew that he wanted to perform with these musicians, as their energy and love for each other was obvious, as McPherson, Burton, and Cary had been playing together for nearly 20 years, and it came across to audiences.

These musicians became the core of Eubanks’ current Quintet, musicians who are proud members of the last generation to apprentice under the true masters of the jazz idiom; outstanding figures such as Betty Carter, Abbey Lincoln, Art Taylor, Andrew Hill, Jackie McLean, and Elvin Jones. This experience comes through in the music, as they treat it with intent and purpose.

Though this is Eubanks’ first recording as a leader in over 10 years, the trumpeter never stopped composing, though he continued recording and performing as a sideman. Of course, the band was there but the next shoe just never fell. For whatever reason, the next step was never taken.

It was at the urging of his father and his wife, Aleta Eubanks, that everything began to fall into place. A label to release the album was secured, then the recording studio and then the mastering engineer. It all seemed to be a natural process once the forces were in motion.

The recording begins with the original “Purple, Blue, and Red,” a piece with a spectrum of moods from cool ballad to bright uptempo swinger. Beginning with “AS Is,” the next two pieces are written for Eubanks’ nieces, the former a Freddie Hubbard-esque hard bop piece followed by “Rosey,” a bass heavy, contemporary sounding piece composition with hints of R&B. Mulgrew Miller’s “Holding Hands” is the only non-Eubanks composition; it is handled with an intriguing yet respectful arrangement featuring former Miller associate, vibist Steve Nelson and an enlightened and inspired Cary, who channels Miller’s energy in his solo. “Beer & Water” is a catchy piece with wonderful solo features from Eubanks and Burton, not to mention McPherson’s tremendous drum work.

The spare and lilting “Anywhere’s Paradise” presents a wonderfully spontaneous performance, as the band had never played the piece before. The grooving “Dance with Aleta” is a head-nodder of the highest order and features the great saxophone playing of Burton. “Aborted Dreams” has a late night, hazy vibe fitted perfectly for Nelson’s vibes and haunting solos from Douglas, Eubanks and Burton. A regular fixture in the band’s book, “Slew Footed,” leads with McPherson’s fantastic percussion gymnastics followed by the group’s playfully swinging take on the tune, making this easily the most spirited tune in the program. The recording concludes with “’P,’” a tune with a stately theme that also has a sense of fun, and is named for Eubanks’ son, Preston.

Frequently, it takes a push for things to come to a head. Duane Eubanks is fortunate to have and have had some tremendous support in his endeavors. Things of that Particular Nature is a musical homage to these strong, guiding hands from an artist who took the next step when the time to present his new exemplary work presented itself.