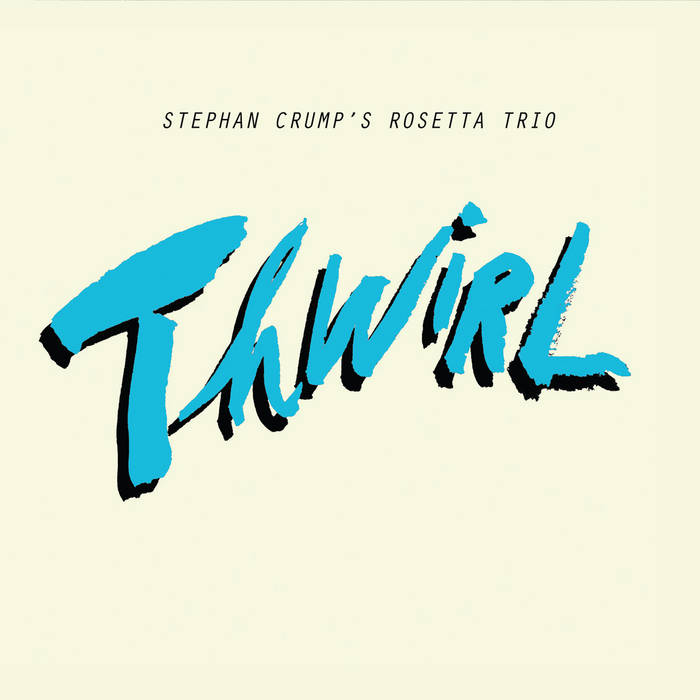 John Cratchley Rosetta is apt...the key to an ancient language that, once unlocked, led to so much knowledge and understanding; make the connections for yourself...

When it feels right, stick with it...and keep digging.
Rosetta Trio has done just that, and on Thwirl they achieve a breakthrough of their own.

Crump brought together Rosetta Trio for the first time in 2005 to record an album of pieces written in the aftermath of 9/11. That “engaging and sublime meeting” of Crump on acoustic bass with guitarists Liberty Ellman and Jamie Fox, produced Rosetta (2006), which was greeted enthusiastically by fans, radio, and the press. “Here is a string ensemble for the new century!" raved Donald Elfman in All About Jazz NY. Their second album, Reclamation (2010), declared “a low-key marvel” (JazzTimes) and noted for its “bareness in emotion” (NPR), was much more than a follow-up effort, though it was the earlier album that gave the trio its name and its mission: to inhabit the dynamic and rhythmic flexibility of a drumless ensemble and embrace its challenges and expanded responsibilities; to reject restrictions of genre; to explore different territories of feel, texture, color; to groove. Recorded after eight years of collaboration and on the heels of a two-week European tour, Thwirl captures Rosetta Trio not only at peak telepathy, but charting new territories of shape and feel.

The opening piece, “Ending,” is a meditation initiated by Crump’s resonant unaccompanied bass and through which the trio emerges into the album. The cinematic “Reclamation Zone,” whose particular cadence represents an accomplishment that took the band years to achieve, is inspired by the artful, green repurposing of many New York City post-industrial zones. The lovely, laconic “He Runs Circles” is inspired by Crump’s youngest son’s pre-verbal manner of showing affection by circling around his father.

The vision of a steady, quiet, but heavy snowfall is the basis for the cascading “Whiteout,” while the title track, “Thwirl,” is tricky, playful, and off-kilter...another triumph in feel that took time to discover. After all that work, “Still Stolid,” an older piece from Crump’s Tuckahoe album, feels like sliding into a well-worn saddle for an easy ride. “Conversate (talking-wise),” Fox’s first piece for the trio, is a moving exercise in group interplay...a perfect example of his unique compositional voice, while also fitting the trio perfectly.

The oceanic “Flotsam,” an underwater mobile of carefully balanced gestures, was originally intended for the Rosetta album, but required the trio’s deepening touch to render just so. “Palimpsestic” is a pointillistic, architecturally-inspired piece written for an eponymous concert series at the beloved, intimate Barbès venue in Brooklyn, site of the trio’s very first performance. The album concludes with “Steel Skin & Sky,” a dreamy, sky-gazing ode inspired by a New York Times Magazine photo essay on the elite cadre of steel workers whose final touch is needed to coax giant beams gently into place high above the city streets.

In Crump’s own words: “This album feels like an arrival for the trio...at the least, a snapshot of a special period of breakthrough on our journey. Although the group’s chemistry was immediate upon our first gatherings, there are subtleties and depth now to the way the band functions, the way we feel the music together, that could come only from years of work. It’s as though, now, the trio is its own entity. Perhaps, then, this could be a sort of final statement for the band, but I can just as easily see it continue to grow in a number of rich directions. We’ll see...”

Many discerning jazz listeners have come to know Stephan Crump from his fourteen years of collaboration with Vijay Iyer, particularly in the core trio which created Accelerando and the Grammy-nominated Historicity. Stephan has worked for nearly as long with Liberty Ellman, notably on the Pi discs Tactiles and Ophiuchus Butterfly. And together with Jamie Fox, Crump performs and records with his wife, the radiant singer-songwriter Jen Chapin, most recently on Light of Mine (featuring Rosetta Trio) and her brand-new Reckoning.

Since his arrival in New York almost two decades ago, Crump has found it both natural and essential to be part of multiple music scenes. A child of Memphis, he is strongly influenced by the blues, R&B, rock and soul music of his hometown but is also inspired by the classical traditions of his Parisian mother’s native land. He is a pillar of the progressive jazz scene, but also works outside it, often with eclectic uncategorizables such as Telecaster wizard Jim Campilongo. Known for his elegant, purposeful groove and for transforming his instrument into a speaking entity with a magnetic pull on audiences, Crump has recorded and performed across the globe with, among others, Bobby Previte, Patti Austin, Gordon Gano, Joel Harrison, Mahavishnu Project, Big Ass Truck, and Johnny Clyde Copeland. As a composer, he is emerging as a singular voice, one who “avoids obvious routes but manages never to lose his way” (New York Times). His music can be heard in numerous films and on his seven critically acclaimed albums, the three most recent of which document duo collaborations with alto saxophonist Steve Lehman, pianist James Carney, and guitarist Mary Halvorson.

Ellman and Fox were both fixtures on the San Francisco Bay area scene and had toured internationally before arriving in New York in the 90s. Aside from his own critically-acclaimed recording career, Ellman has been featured as guitarist and producer in Henry Threadgill’s innovative group, Zooid, and has performed with other jazz visionaries such as Steve Coleman and Greg Osby. An accomplished jazz composer in his own right, Fox brings his idiosyncratic folk, R&B and blues perspective that has contributed to the music of such legends as Joan Baez and Brother Jack McDuff.