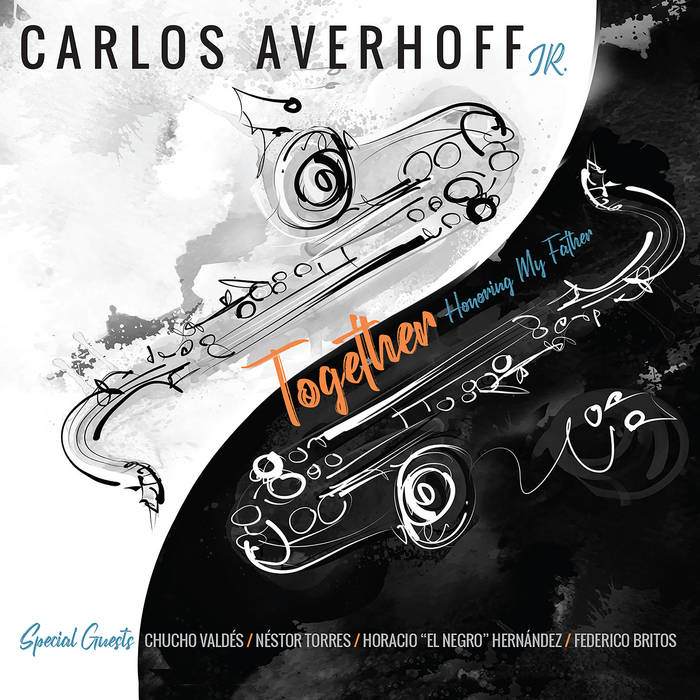 Losing a parent can remind the bereaved of the moments lost and the chapters that remained unfinished in their relationships. Saxophonist and composer Carlos Averhoff, Jr. knows these feelings all too well. When his father, legendary Cuban saxophonist Carlos Averhoff, passed away, the younger Averhoff had just begun an album that would represent their first collaborative work. Though his father left too soon to complete it, Averhoff, Jr.’s album Together serves as a perfect tribute to his father’s career and their mutual respect for each other.

Averhoff’s father was a member of the iconic Cuban jazz ensemble, Irakere, which was led by pianist Chucho Valdés. The outstanding group was one of Cuba’s chief cultural exports, making Averhoff, Sr. lead a very busy life as a performing and touring musician. Though he did not get much direct instruction from his father, Averhoff, Jr. would get the benefit of his father’s teaching through Juan Felipe Tartabull, Averhoff Jr.’s first saxophone teacher and once a disciple of his father.

The relationship between father and son strained when the elder Averhoff left Cuba, finally settling during the late 1990s in Miami, where he eventually began to teach at Florida International University and started to develop his career as a band leader.

At the age of 26, in the year 2006, Carlos Averhoff, Jr. arrived in Miami reuniting with his father and making a reality the dream of playing along him on a musical project. Though they did have some opportunities to perform several times, the environment for jazz in Miami proved to be a bit stilted for the younger Averhoff. He was able to meet and perform with Miami’s best musicians, many of whom had collaborated with his father for years.

After two years in Miami, Averhoff, Jr. moved to Boston to attend both Berklee School of Music and the New England Conservatory of Music. Today, Averhoff, Jr. leads two musical projects, Iresi & iQba. He is a performing artist, composer, and educator established in Dallas, Texas and was recently appointed Jazz Saxophone and Latin Ensemble teacher at Tarleton State University.

In 2016, Averhoff, Jr. yearned for an opportunity to record the album with his father. They agreed to do so, and the younger Averhoff began to assemble arrangements and original compositions that would suit his father’s more traditional playing style. At first, Averhoff, Jr. recorded six pieces with the intention to re-record the saxophone’s parts along with his father. From the first part of the recording session back in 2016, father and son were able to do a single recording playing simultaneously an arrangement by Averhoff, Sr. of Charlie Parker’s “Donna Lee.” In December or 2016, Carlos Averhoff, Sr. passed away and the plans concerning the album were shelved.

Around late December of 2020, Averhoff, Jr. decided to complete the project that he had begun with his father, but this time with a different point of view. He would dedicate the album to his father and invite as many of his father’s collaborators as he could to complete the principal six tracks and record two new tracks. Averhoff, Jr decided to leave intact all the original saxophone tracks he recorded back in 2016 honoring the presence of his father who, despite not being unable to record, enjoyed the entire recording process in person.

The album’s musicians from the principal quartet, pianist Jim Gasior, bassist Nestor del Prado, and drummer Reinier Guerra were members of Averhoff, Sr.’s last ensemble in Miami. The marvelous Cuban drummer Horacio “El Negro” Hernández had been the only original guest artist on the album, but he would be joined by a veritable who’s who of the Latin jazz world, including Averhoff’s former band leader, pianist Chucho Valdés, flute master Néstor Torres, the well known Federico Britos on violin, and other popular names in Cuban Jazz today.

The recording begins with Averhoff, Jr.’s “Sequence,” a tune composed honoring the work of his father as band member of the legendary Irakere. Chucho Valdés‘s rhapsodic, yet powerful, piano introduction, setting up a stirring mid-tempo Latin groover with an expanded horn section which includes former Irakere members German Velazco on alto sax and trumpeter Juan Munguia, who shared the band stand with Averhoff, Sr. for many years. Venezuelan pianist/composer Silvano Monasterios’s “The Magician” has Néstor Torres on flute as one of its many highlights. The title track was written by Averhoff, Jr. for his father; the quirky melody echoes the elder’s sense of humor. Averhoff, Jr.’s “Oriented Conga,” an up-tempo, percussively energetic romp, tastefully changes the album’s feel. The energetic solo performances by Orlando “Maraca” Valle on flute and Averhoff, Jr. on tenor sax also deserve mention.

Averhoff, Jr. decided to include in this work a more contemporary Latin Jazz sound that had influenced himself, thus he recorded Sam Rivers’s “Beatrice,” done here with a unique, pointillistic arrangement with mixed meters. “Beatrice” was a favorite standard for Averhoff’s father to perform in his live appearances. Nueva Trova songwriter Martín Rojas’s “En La Orilla Del Mundo” brings a nice change of energy to the album. Averhoff, Jr. recorded it with vocalist Maggie Marquez and guitarist Ahmed Barroso, formerly of his father’s ensemble, The Trio. Joining on the violin is longtime friend Federico Britos. A two-saxophone quintet performance with Cuban saxophonist Cesar Lopez and Averhoff, Jr. on his “Not for Everybody” provides another burst of energy. The recording concludes with Parker’s “Donna Lee,” the only piece that Averhoff, Sr. was able to record on soprano along with his son on tenor sax. His arrangement of the classic bebop tune provides a perfect sendoff over a propulsive rhythm that Cachao would have been proud of.

Though he regrets that he could not get the project done along with his father, Carlos Averhoff, Jr. is proud to complete a terrific recording in Together that was built to salute the great Carlos Averhoff, Sr.