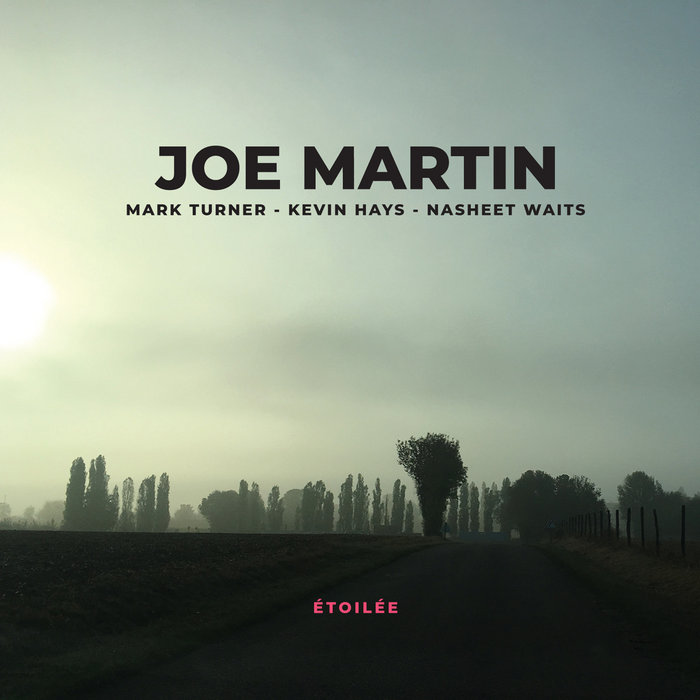 There is an energy that a strong family dynamic can stir. A parent viewing the world through their children’s eyes generates a wide spectrum of feelings. It is with his family as a source of strength that bassist and composer Joe Martin created the music for his new recording, Étoilée. Martin, himself a product of a musical upbringing, lives with his Parisian-born wife in Brooklyn where they have been raising their young Franco-American family of two sons and a young girl, whose middle name Étoile inspired the name of the recording.

Originally hailing from the Midwest, Martin moved to New York City in the mid-90s and has since carved a place at the forefront of jazz as one of the most respected and sought after bassists in the City. His skills as an accompanist and his unique solo voice have propelled bands led by Mark Turner, ‪Gilad Hekselman‬, Chris Potter, Edward Simon, Anat Cohen, Kurt Rosenwinkel, and many more. Melodic and poetic, Étoilée is a musical tapestry that captures both his writing and bandleading talents. For this session, he assembled a group he leads regularly in New York: Mark Turner, Kevin Hays, and Nasheet Waits.

The members of the quartet are highly accomplished artists who Martin considers part of his extended musical family. He has known Turner since the mid 90s and has performed in Turner’s quartet since 2012. Martin and Turner were both in Kurt Rosenwinkel’s groups in the 2000’s, and notably, perform on Rosenwinkel’s live Village Vanguard recording, The Remedy. Kevin Hays (as well as Turner) is on Martin’s first recording, Passage (Fresh Sound 2001), and they have played regularly since. Nasheet Waits is one of the first drummers Martin ever performed with in New York City, a jam session circa 1992. Waits comes from a deep jazz drumming lineage. His is completely fearless in the moment, bringing a beautiful volatility to the music which Martin considers integral to the group sound.

The quartet brought Martin’s well-worked original compositions into Sear Sound Studio in early 2018. Master engineer James Farber recorded the group and helped capture the outstanding connection the ensemble has and the spirit that they bring to Martin’s eight compositions.

“A World Beyond” kicks off the album, and the simpatico and trust amongst the quartet is felt immediately. An open and optimistic song that brings to mind a daydreaming child imagining the breadth of the universe, the groove laid down by Waits and Martin’s intervallic playing sets the tone for some magical band interplay, with Hays on Fender Rhodes. The title “Malida” is an amalgamation of letters from the names of Martin’s wife and two sons. The bass introduction sets a deep mood as the dramatic theme and solos unfold, evoking the intensity of interfamily dynamics. “Prospecting” is a reference to the Brooklyn neighborhood where Martin lives with his family and the exploratory, playful nature of the piece. “Two Birds” is an elegant ballad dedicated to Martin’s parents. His father, a classical clarinetist and music professor, and mother, a violinist and librarian, often brought him to concerts and rehearsals as a child, lighting a spark for a life in music.

The swinging “Safe” (Martin’s title is a sly nod to baseball lingo) is an uptempo contrafact on Jule Styne’s “Just In Time,” with an added vamp section acting as a springboard between soloists. “Long Winter” is a journey set up by a lush rubato statement. A melodic bass ostinato emerges taking us to a second theme and solos. The piece finishes with a stunning arco bass recapitulation of the original theme. Inspired by the profound ways Martin’s daughter has colored his life, “Étoile” captures her, featuring Turner’s resonant soprano sax. The recording concludes with the elusive “5 x 3”, Martin showing his facility using less common form and phrasing to create cohesive and flowing music.

Joe Martin takes the powerful spirit instilled by his nuclear family to fuel the passion of four longstanding musical peers on his emotionally enriching release, Étoilée.