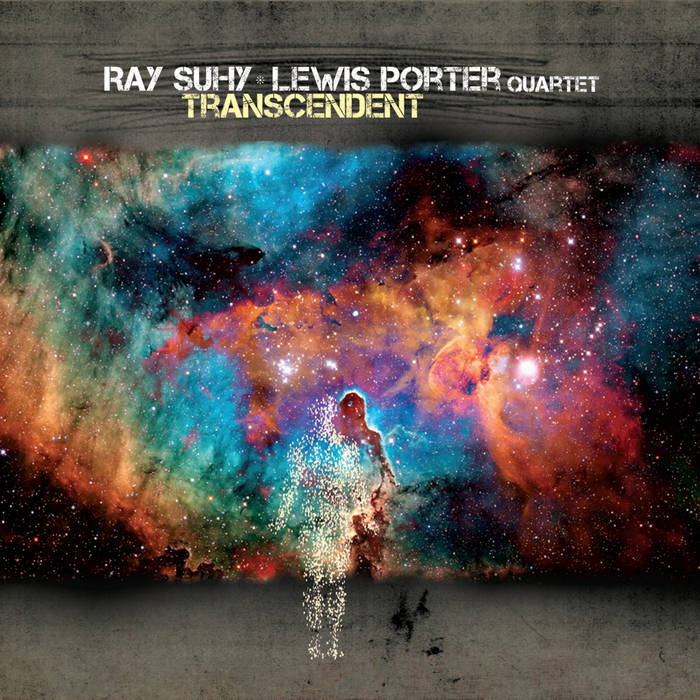 There is music that seemingly possesses mystical qualities, transcending the temporal; qualities that musicians seek in order to reach higher planes in the subconscious and to communicate between collaborating sound makers and their listeners. Exploring these paths in music typically leads musicians to other like-minded individuals in search of the sublime.

Jazz history is rife with examples of these musical seekers. Saxophonist John Coltrane and pianist McCoy Tyner come to mind immediately as musicians who used their development in music to reach beyond themselves. Guitarist Ray Suhy and pianist Lewis Porter come together on their new recording, Transcendent, under the influence of these wayfaring heroes to create music that reaches magical heights of musical interaction.

Porter has been well known in the New York City jazz scene for some time. His expert piano playing can be heard regularly throughout the City as well as on tour throughout the USA and Europe. Porter has also played an important part in advancing the music’s legacy as a scholar. He has written important books on the subject (including the impressive John Coltrane: His Life and Music) and has been a professor and director of Rutgers-Newark University’s Jazz History program.

Guitarist Suhy came to jazz early in life, as he was introduced to the music of Miles Davis and Coltrane during his formative years. He attended Berklee College of Music and the New School before moving back to Maine, where he taught and became involved professionally with bands ranging from metal to jazz. Now based in New Jersey, Suhy is best known as the lead guitarist in Six Feet Under, a widely touring and influential death metal band.

The pair met when their mutual friend, composer/arranger Allen Lowe, invited them to be a part of one of his projects. There was an immediate chemistry between Porter and Suhy. They were both impressed with each other’s musical intensity and they shared a passion for similar musical icons, including Coltrane, Tyner, Chick Corea and Monk.

The pairing of guitar and piano has been a favorite of Porter’s for some time. At one point, the pianist co-led a quartet, Dharma Jazz, with the late great Vic Juris. Suhy’s broadly informed, signature style attracted Porter immediately. After their first meeting, the two began to collaborate regularly. Their first recording together, Longing (Cadence, 2018), presented the duo along with bassist Joris Teepe and drummer Rudy Royston on pieces inspired by jazz and classical music.

For their next recording, Porter wanted to add a blowing rhythm section that would allow them to really delve into the dramatic modal ideas that they were developing. Porter invited the great bassist Brad Jones and reunited with his first call drummer, Royston, with whom he had played dozens of dates, to add fuel to their musical fire.

Suhy and Porter wrote all the music for Transcendent. Their intent was to build off their work on Longing and to develop a program of music with even more variety and color. There was also a concerted effort to use a blues orientation in structure and effect.

The recording begins with Suhy’s “Mr. Tyner,” written in tribute to McCoy Tyner, which explores the great pianist’s use of large intervals in his melodic development. Porter’s swingingly insistent “Second Voyage (This Time for Real)” churns dramatically in a Herbie Hancock “Maiden Voyage” referenced feel with a brilliant showing from the pianist and Suhy. Inspired by the loss of his step-father, cousin and friend in 2019, Suhy’s melancholy “Trail of Loss” floats by with Porter on Fender Rhodes with a blue, noir haze. The guitarist’s impressive “Determination” flies with fleet fingered, fusion energy over Royston’s rocking drums.

Beginning with a stately martial feel, Porter’s strictly written “Motet” has a Renaissance-like air before building into a freely swinging Coltrane inspired waltz. Suhy’s introspective “Walk in the Fall” is a lilting modal ballad based on a melodic minor scale, while his “Intention” takes its spiritual cues from the great Coltrane Quartet records of the 1960s. The program concludes with Porter’s “Another Way,” a contrafact of Herbie Hancock’s “Maiden Voyage” utilizing Hancock’s harmonic colors and favored electric keyboard, the Fender Rhodes.

Ray Suhy and Lewis Porter reach great heights in music making on their new Transcendent, a recording that shows the depth of two brilliant musicians whose coming together allows gorgeously inspired and communicative sounds to soar.