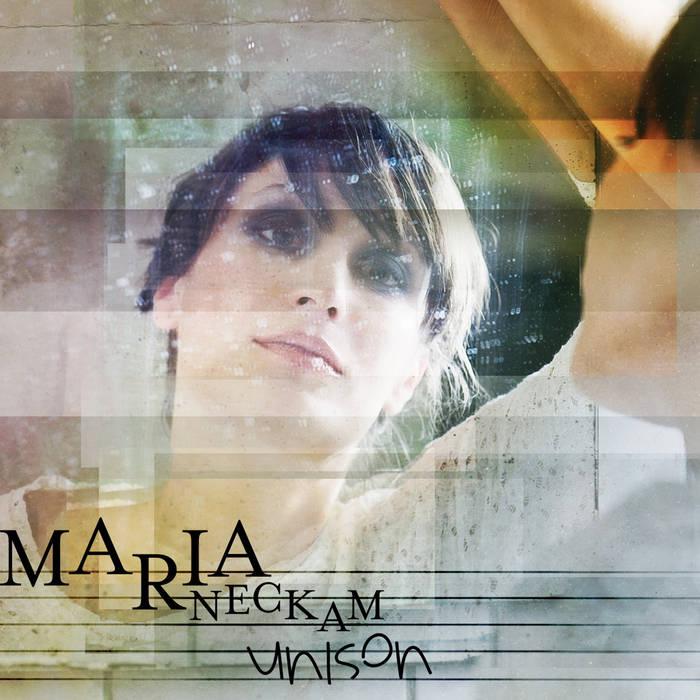 In hindsight the early 21st century is going to look like a golden age for jazz vocals, an era defined by the emergence of an international array of artists possessing strikingly original sounds. No one better embodies jazz’s glorious profusion of vocal talent than Austrian-born Maria Neckam, a singer possessing an exquisitely calibrated soprano and a poetic sensibility informed by avant pop, contemporary classical music and post-bop improvisation. Her new album Unison, slated for release June 6th on Sunnyside, captures her in all her kaleidoscopic splendor, delivering a program of exceptionally divergent original songs that sound unlike any other singer on the scene.

The first thing that strikes you about Neckam is the sheer beauty of her crystal clear voice, which seems to get more pure as she approaches the top of her range. On Unison, she comfortably inhabits the role of both singer and vocal instrumentalist artfully blending with her accompanists. The self-produced session features some of the most sought after young musicians in New York City.

The ensemble started taking shape during a 2010 tour of Italy with Parks, Felder, Morgan and Stranahan. “It just worked immediately,” Neckam says. “We fit as people and as musicians. I think I’ve always been pretty good at bringing people together. When I came to New York I was connecting with a lot of players who I really looked up to, and now they’re all my friends.”

That sense of camaraderie suffuses Unison, which showcases Neckam’s myriad gifts as a stylistically expansive composer and lyricist (all the more impressive as she’s writing in a second language). She opens the album with “I Miss You,” a straightforward pop song that brings to mind Suzanne Vega. Navigating a wildly twisting melodic line on “Obsessed,” she based the piece on an octatonic scale where the harmonic movement amplifies the intensity of the lyric.

“I like to let the words take the music wherever it needs to go,” Neckam says. “The time signature changes all the time. It’s like talking. We don’t just talk in four/four.”

When she’s not writing the words herself, Neckam draws on some of the world’s most luminous poets. On “Where Do You Think You Will Be?” she sets a poem by the beloved 14th century Persian mystic Hafez to a linear melody accompanied by Mariel Roberts’ mournful cello. She takes a similar compositional approach to “Solitude,” her lilting recitation of a Rainer Maria Rilke poem that unfolds with intertwining saxophone lines.
“Hafez is so deep and spiritual but also down to earth, and the language is so beautiful,” Neckam says. “Some songs I write have a jazz structure, with theme, improvisation, theme, but I also write pieces that go from A to B and that’s it, like ‘Solitude.’ In some way it’s not what you think of as a ‘song’ at all. But Rilke’s lyrics are so strong, even improvising around them would be an insult.”

The title track captures Neckam at her most buoyant and vulnerable, with her voice floating gracefully over a quilted bed of horns. “January 2011” opens with a similar wordless vocal, and also evokes a sense of spiritual longing, with a deceptively simple melodic line inspired by Schubert. She closes the album with an ode to contentment “Half Full,” a reassuringly bright note from an artist who doesn’t shy away from earnest self-reflection.

“The first time I read Rilke’s ‘Letters to A Young Poet,’ about the importance of being alone, was a big deal for me,” Neckam says. “That was just before I started practicing Buddhism, and that’s what the song is about, taking responsibility for yourself. I have a tendency to focus on what I don’t have yet. It’s about being in the moment, and being happy with where you are.”

Neckam has every reason to take pride in her accomplishments. Growing up in Vienna, she soaked up the city’s sumptuous cultural offerings, developing a passion for opera, pop, musical theater, rock and sacred hymns. She studied piano and started writing songs on guitar while launching a series of rock combos, recording with Sounds of Silence and performing as a solo act under the name Knecke.

By her mid-teens she found her way to jazz and quickly realized that the music provided an ideal outlet for her burgeoning musical imagination. Enrolled at the Conservatory of Amsterdam, her musical horizons expanded exponentially, as she connected with musicians from around the world. She immersed herself in contemporary classical music, honed her jazz technique, studied Hindustani, Middle Eastern and Southeast Asian traditions and played drum ‘n’ bass. She even found time to record her first album, Crossing and Blending, a stylistically expansive world-jazz session.

As stimulating as she found her years in the Netherlands, Neckam never really felt comfortable in Amsterdam. Moving to New York City, she immediately realized she had found her place. “After two weeks I felt home, it just felt right,” Neckam says. “The music scene was not so open in the Netherlands. It was much harder as a foreigner to get anything going. In Europe there’s the attitude of the suffering artist, and teachers can be quite mean. People end up leaving school broken. Here everyone was so positive and supportive, and working hard was a positive thing.”

By the time she graduated with an MA from the Manhattan School of Music in 2007, she had studied with master vocalists Luciana Souza, Peter Eldridge and Theo Bleckmann, tabla expert Samir Chatterjee, and pianist/composer Nils Vigeland. The colleagues she’s collaborated with include many of the most influential and stimulating improvisers on the scene, including Thomas Morgan, Dan Weiss, David Binney, Jeff Ballard, Jon Cowherd, Lewis Nash, Aaron Goldberg, Jonathan Kreisberg, Aaron Parks, Mark Guiliana, Miles Okazaki, Lage Lund, Mike Moreno, and Colin Stranahan.

She made her Sunnyside debut in 2010 with Deeper, a session that led All About Jazz to name her one of the most significant “New Discoveries” of the year. As the title suggests, Unison is a more cohesive session, though it still reflects her expansive sonic palette (lately she’s been channeling her love of dance music and electronica into her solo project Milán). Her music doesn’t fit neatly into jazz, but given her web of musical relationships, rhythmic dexterity and improvisational skills she’s indelibly linked to the New York scene.

“I really feel a part of society here and want to be a part of it,” Neckam says. “A lot of times people want to put you in boxes and think of me as an Austrian artist, but I’m not. I moved away a long time ago. I’m not an artist who moves here for a while to get inspired and then moves back. This is where I want to be.”

With a team of top-shelf players dedicated to her wildly inventive, unapologetically beautiful music, Neckam is clearly in exactly the right place.