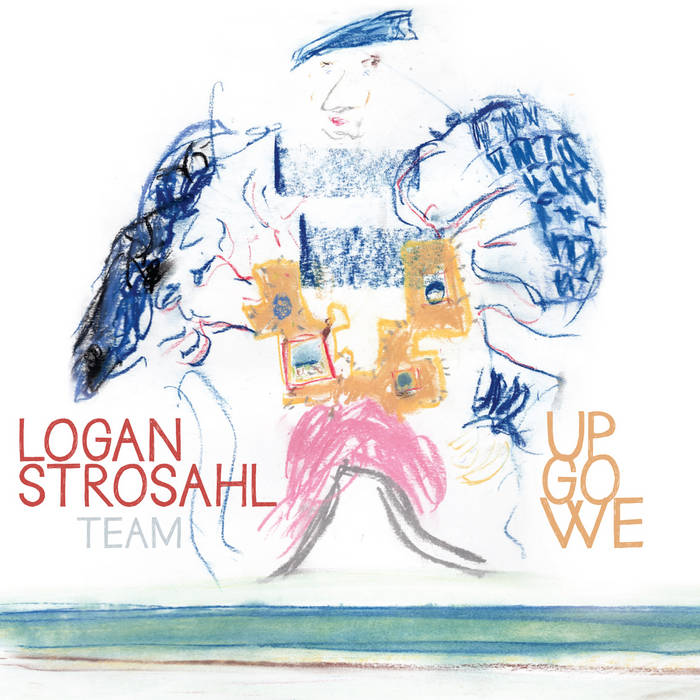 Daniel Segel Logan is talking to me . With a voice that sounds like a real voice: in the sense of really being a voice and of telling the truth. Playful, contemplating, thinking "how to phrase this? Oh, this way!"

The creative urge can stem from many surprising sources. Through the eclecticism nurtured by the ease with which younger generations are exposed to diverse music, arts and philosophies, more and more artistic endeavors present new modes of invention with the aid of thoughts and practices spanning centuries. These tendencies are especially apparent in younger artists.

Saxophonist and composer Logan Strosahl has been absorbing multifarious influences from early on. He has filtered these influences, ranging from modern jazz to 16th and 17th Century consort music, into his own musical vision that can be heard on his new recording, Up Go We.

Originally hailing from Seattle, Strosahl grew up in a household of music lovers who celebrated his obsession with the saxophone, enabling it to become his passion. His dedication to jazz led him to the highly regarded jazz program at Roosevelt High School in Seattle and then to the New England Conservatory, where he graduated in 2011. There, while noticed foremost as an improviser, his developing compositional craft became apparent in a series of compositions featuring inspiration from many sources and bold juxtapositions. His devotion to jazz improvisation continued alongside his compositions. It is only recently, with Up Go We, that Strosahl says the two have been somewhat reconciled—compositions such as “Up Go We,” “M.M: Ground,” and “The Leaves Be Green” feature a balanced proportion between carefully crafted composition and improvisation.

On Up Go We, these influences are apparent: the two artists he says most inspired the project were Ellington and Henry Purcell. Ellington’s brilliant eclecticism, orchestration, and, in turn, haunting and raucous energy were constant features of Strosahl’s high school years in the Roosevelt Jazz Big Band (a school that has won the prestigious Essentially Ellington competition many times, including Strosahl’s senior year)— his familiarity with the Duke’s repertoire is ingrained. Henry Purcell, a composer inspiring almost ecstatic admiration in Strosahl, is particularly prized for his extraordinary command of polyphony and part-writing, where every single voice in a 4 part melody has a strong melody of its own. Thus, many individual parts unite into a whole, which is one of the founding tenets of jazz. Both artists pack a huge amount of musical content into a very small space. As always for Strosahl, improvisation is at the heart of any musical venture, his remarkable ability can be easily glimpsed on Up Go We.

To help present his work on Up Go We, Strosahl has enlisted a tremendous “Team” of talented peers he met during his time at NEC and who, like Strosahl, now call New York City home. Each is active in the City’s variegated music scene, playing in indie rock, folk, chamber-pop and jazz ensembles, and each have their own body of original music. The ensemble includes high school friend and trumpeter Andrew McGovern, tenor saxophonist Sam Decker, clarinetist Michael Sachs, pianist Nick Sanders, bassist Henry Fraser and drummer Connor Baker. The individual sounds of these players is a major factor in the group-sound, and, in another parallel to Ellington, it will be exciting to see how their musical personalities further advance the music as the group moves forward.

The recording begins with “I Miss You,” a heartfelt chorale, the melody and voices of which were worked out unusually quickly by Strosahl early one morning—the fragile opening becomes more confident as voices are added in, shading a chord progression tinged Romantic-era harmonic inflections. “Bildung” is a musical journey constructed with cycles of harmonic moods that lead through the human drive to self-improve (“bildung” is a German word of complex meaning, but generally signifies something like “self-education”) while Strosahl solos, the rhythm section charts its own harmonic path while a single concert G sounds between the instruments. “The Leaves Be Green” is a set of variations on a 16th century English popular song, written in a polyphonic style to convey the effervescent sound-world of the English Renaissance. Sam Decker solos in reference to this style, while Fraser interacts in polyphonic support.

“M.M.: Ground” is written on a repeating ground bass that allows the harmony to swell while Strosahl takes an extended solo on decidedly un-16th century harmony. The title piece sounds a bit like the meeting of Birth of the Cool era Miles Davis and Ornette Coleman; both Strosahl and bassist Henry Fraser take solo turns on time-no-changes, while the horns interject with an airy, vamped sequence of chords and Strosahl periodically steers them into a free-improvisation structured around a chromatically winding upward phrase.

Inspired by an essay on part-writing by Henry Purcell, “Note-Against-Note a3 (for Lyle)” is a brief but lovely composition using the logic of formal, simple note-against-note voice leading. Inspiring both excitement and mystery, “Moon” is built on different contrasting sections; ranging in influence from jazz to minimalism to pop to strict polyphony.

“DK’s Jungle Jewel” (DK = Donkey Kong) is the most formally constructed piece on the recording. It combines the rhythmic profile of a “courante” dance in 3/2, with a tongue-in-cheek festivity, while “DK’s Jungle Nights” keeps the former’s rhythmic identity and downward momentum but adds a Ellingtonian flare as the instruments become more and more unruly, echoing the earthiness of Duke’s early big band work. These two compositions feature the most ornate counterpoint found on the record. The recording concludes with a rendition of Jerome Kern’s “Smoke Gets In Your Eyes,” a ballad that Strosahl enjoys, played as a quartet firmly grounded in the jazz tradition.

Saxophonist Logan Strosahl has always viewed jazz music as one of inclusiveness, citing diverse influences that drove the work of many great artists in Jazz. For Up Go We, Strosahl has put together a collection of compositions that represent his unique sound world, where Ellington and Purcell meet under the banner of improvisation and polyphony.