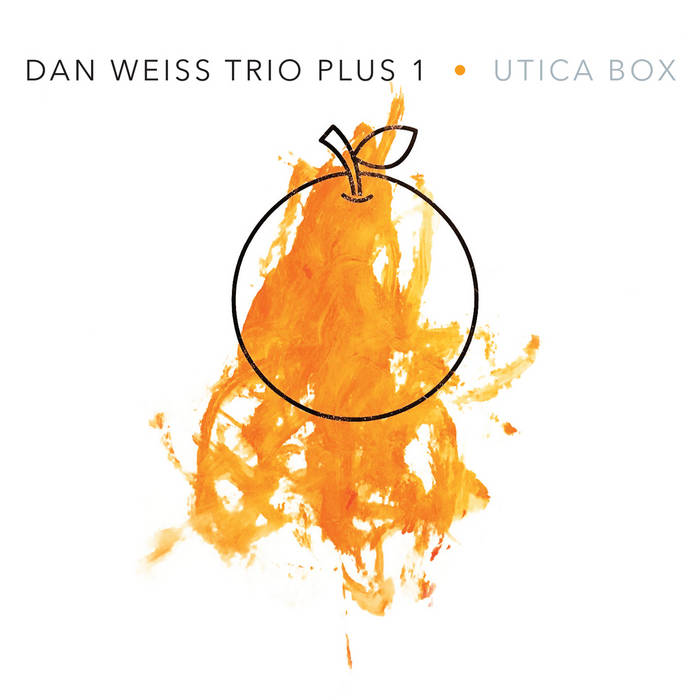 timothy van cleave The musical journey of this album tells a story that can only be expressed through music. It's groovy, sparse, heavy, intense, and passionate. It's a well woven set of works that gives you a little bit more food for your soul every time you listen.

The music of drummer/composer Dan Weiss always exceeds expectations. No matter the musical situation, he tends to push the boundaries of genre, ensemble sound and expectations. The title of his new trio recording, Utica Box, is a fitting conflagration of a barbaric psychiatric treatment, the Utica crib, and Weiss’s tendency to write and perform music that is outside the box.

Just like the Utica crib, the expectations of jazz listeners can create a claustrophobic setting for musicians. Weiss is a student of jazz and drumming but doesn’t want to be confined to either’s past. His own musical studies have bridged the world of jazz with that of metal, Indian and contemporary classical music. Thus, Weiss breaks the barriers between all these to create his own rhythmically driven and technically demanding music, music outside of the box.

Weiss’s trio has evolved over the past decade as their regular performances have allowed them a near telepathic communication. Pianist Jacob Sacks is a tremendous asset as his approach to the instrument is deft and his method studied. Weiss employs two bassists on Utica Box, singly and dually, depending on what his compositions ask for and the strengths of the bassist. Thomas Morgan and Eivind Opsvik are both at the top of their field on their instrument, Morgan an especially solid accompanist and improviser and the incredibly supportive Opsvik, a master of bowing.

Playing with the trio allows Weiss to focus on a classic element in the jazz tradition, namely the piano trio, and reshape the expressive possibilities to his demanding music. The addition of a second bassist for a number of pieces creates a unique texture and feel.

As a student of the drum and constant practitioner, Weiss has begun to focus on the drumset as a starting point for composition. His past trio projects found him composing from the piano but his recent work has found him utilizing ideas developed in study to become kernels of compositional ideas. Consequently, the pieces utilize more extended musical forms, becoming longer and more openly structured. The repetition inherent to the pieces becomes a basis for improvisation.

The recording begins with the hypnotically persistent “Utica Box,” a piece written in the Japanese gardens of the Rockefeller Estate, where Weiss participated in a residency program in 2013. The piece utilizes subtle changes over long periods of time, a la Morton Feldman, by extending the beats, while both bassists swirl over the drums. The mysterious “Jamerson” looks toward the Motown sound and the groove of James Jamerson and Benny Benjamin for inspiration, Weiss adding his intervallic language in a unique counterpoint with Sacks.

An experiment in the juxtaposition of notes and rhythmic space, “Rock and Heat” is a showcase for Morgan and Opsvik (the title bearing their Weiss given nicknames) in a straight down the middle swing feel with Weiss’s intervals and stretched time feel. The slowly unfolding “Orange” is an intricate composition that balances the weights of space, texture and groove, including indicating specific registers for the piano. There is an emphasis on blurring the line between composition and improvisation here.

The tricky “Please Don’t Leave” utilizes a strong groove of Cuban/African derivation against a counter rhythm in the hi-hat, a sort of two against three feel, while a romantic melody sings over the top. The idea stemming from a bedtime phrase of his daughter, Weiss’s “Last Time One More Time” is a sensitive lullaby that he originally recorded in a large ensemble but stripped down here for a subtle version with the two bassists in simpatico. The recording concludes with the rhythmic tour de force of “Bonham,” which finds the trio trading moods in a diverse suite dedicated to the Led Zeppelin drummer, whose style has permeated everything Weiss has done.

It remains important for Dan Weiss to continue the lineage of jazz drummers within the established modes of performance. He remains a part of the continuum while diverging into new streams of creative composition on his fantastically charged and paradigm shattering Utica Box.