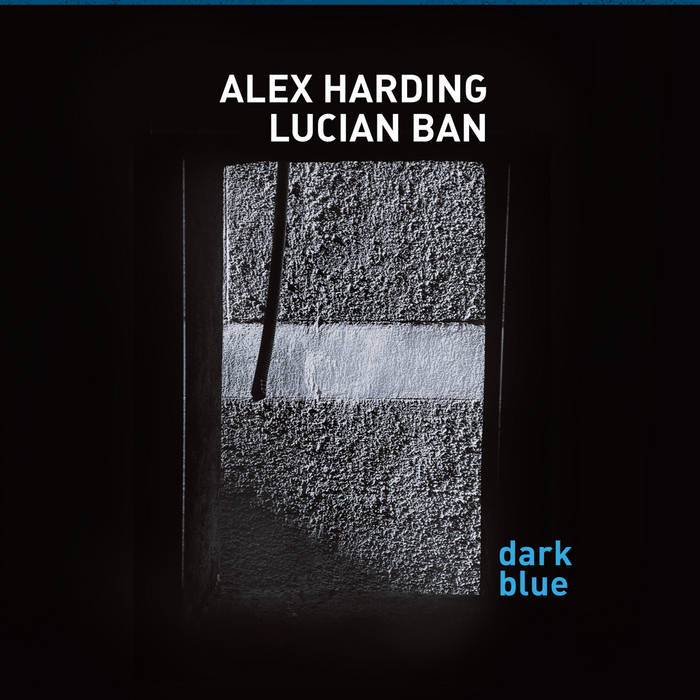 Even though musicians may come from divergent places, it is amazing to find that many have the same proclivities when it comes to musical tendencies and taste. The relationship between Detroit born baritone saxophonist and bass clarinetist Alex Harding and Romanian pianist Lucian Ban is one example, in this case two musician from such different places, coalesce around the power of the blues. Their new recording, Dark Blue, is a testament to their musical and brotherly bond.

Harding got into music early as a child in Detroit. His ever supportive parents allowed him a drum kit, drumming becoming a passion that he pursued until he heard saxophone great Grover Washington, Jr., which led him to switch to tenor sax. In a twist of fate, Northwestern High School band director Ernest Rogers assigned Harding to the baritone sax chair when James Carter joined the band. It took little time for Harding to grow attached to the horn and he continued his study with Motown baritone player, Beans Bows.

Having moved to New York City in 1993, Harding became a regular on the local jazz scene, including stints in ensembles with his heroes Hamiet Bluiett and Julius Hemphill. Ban arrived in New York in the late 1990s to attend the New School. Their mutual friend, saxophonist Erik Torrente, introduced the two at a gig at the Pink Pony in Manhattan. Ban immediately proposed putting a band together and they began to play regularly. The relationship has lasted over twenty years and has produced a number of recordings and innumerable performances.

Though they came from different backgrounds, their musical tastes met at the crossroads of jazz, the blues and the avant-garde. Andrew Hill and Paul Bley became touchstones for their pairing. Harding introduced Ban to a number of the real died in the wool jazz cats and Ban introduced Harding to travel in Eastern Europe, where the saxophonist could see and hear the commonalities between the blues and the European folk traditions.

Dark Blue presents these two long time friends in the most intimate of musical settings, the duo. After a short tour, the recording was made at Tedesco Studio in New Jersey in late April of 2018 with one track recorded a couple of weeks earlier at Blue Lake Radio in Michigan. The program includes a number of pieces the two have played for years, a number of new pieces, and plenty of free improvisation. As Harding says, “Something old, something new; something borrowed, something blue.”

The recording begins with Ban’s “Dark Blue,” a somberly moving example of the various shades and contrasts of the blues. Stemming from a brief compositional sketch, Harding’s “Tough Love” is angular and playful, while Ban’s hazy ballad “Chakra” is revisited for a sensuous live radio performance. Harding takes his reflections of his time in Romania for “Black Sea,” a piece that features him on bass clarinet and some Eastern folkloric modalities. The mainly improvised “Monkey See” is a restrained but playful dance, while Ban’s “Not That Kind of Blues” is more straight ahead and provides the most open blowing.

Harding’s lovely bass clarinet playing highlights his “Esto,” a brief composition that combines elements of past pieces. Harding’s “H.B.” is a moving tribute to his late friend and baritone sax hero Hamiet Bluiett, and features a striking solo performance from Harding. Ban’s “Low Country Blues” is a solo aural representation of the pastoral scenes of rural Romanian life. Inspired by the work of Ralph Ellison, “The Invisible Man” is an improvised piece that frames the musicians’ impressions of the great writer. The recording concludes with Ban’s devastating gospel inflected “Hymn.”

A long and meaningful relationship can blossom between people from different paths, it is only a matter of finding a spark for connection. For Alex Harding and Lucian Ban, that spark was the blues, and their work together has grown unimpeded to produce a thoughtful and gorgeous recording in Dark Blue.