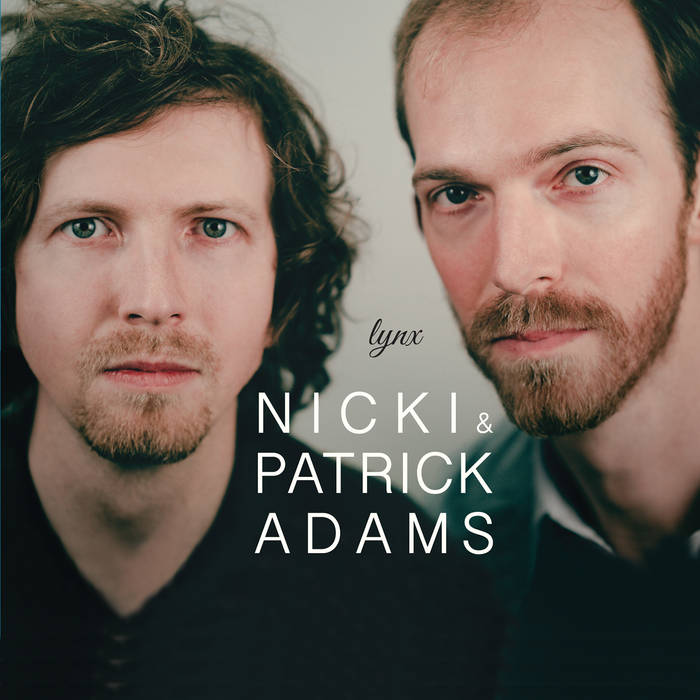 The collaborative essence of jazz ensures that the music is about making connections. These connections can be between individual musicians, different playing styles or even genres, as long as they are joined together in expressions through improvisation.

Brothers Nicki and Patrick Adams have a natural bond that most musicians can never approximate with their peers. Their common upbringing and interests have also given them the idea to blend the aural tradition of jazz with the more written one of classical, with a unique approach that makes their efforts seem buoyant and natural on their new recording, Lynx.

Originally from Prescott, Arizona, the Adams brothers both began playing piano early on at the behest of their parents. In middle school, the two entered the band program, and Patrick took up the trumpet. During high school, they discovered jazz under the guidance of master ceramicist/educator Heath Kreiger. Under Heath’s tutelage, Nicki and Patrick began to seriously focus on the craft, history and aesthetics of jazz improvisation. Heath’s unique approach to jazz education focused on developing a personal sound and left a lasting influence on the brothers.

The elder, Nicki, went to Oberlin Conservatory with Patrick following him not long thereafter. They both gained much from their experience, especially from the impact of educators like Marcus Belgrave, Jamey Haddad and Dan Wall. They spent time apart when Nicki went to the Bay Area after completing school for a year, as a musical director for a theater. When Patrick graduated, the two reunited in New York, pursuing their musical dreams alongside many of their talented Oberlin peers.

The two perform together in a number of configurations, leading their own ensembles, and collaborating with bands of many different styles. They also have collaborated with many of jazz’s finest, including Francisco Mela, Robin Eubanks, Corey Wilcox and Mike King.

Their debut recording as a duo, Lynx, takes its name from an Arizona lake that the brothers frequented during their boyhood years, solidifying bonds both fraternal and musical. The project evolved after Nicki began to reinvestigate classical pieces that he had played or listened to before he devoted his attention full time to jazz. Rather than study scores, the pianist relearned the pieces by ear in an aural learning approach more utilized by jazz and folk musicians. Nicki felt that this approach allowed him more insight into the creative choices of the composers.

Of course, jazz musicians borrow musical information from everywhere and every genre. It was only natural that the conceptual ideas that Nicki was studying began to emerge in the jazz music that he and Patrick were rehearsing together. They began to bring the jazz and classical elements together in a number of pieces of jazz and folk repertoire that they arranged by ear and developed into working arrangements.

Each brother chose four pieces to record on Lynx. Most of the tunes chosen are pieces that might be called in a typical jazz session but each finding particular classical concepts or influences appropriate to it, making for quite a singular performance for each tune. The brothers typically rely on the original harmonic structures to keep the familiarity of the tune, only breaching when the arrangement demands.

The program begins with Joe Henderson’s “Shade of Jade,” a modal piece to which the brothers apply a rhythmically complex pattern derived from Béla Bartók’s Six Dances in Bulgarian Rhythm and Mikrokosmos piano etudes, most notably in the piano ostinato and floating triads. Patrick’s shining trumpet provides a stark intro into Thelonious Monk’s “Pannonica,” which finds itself impressionistically melded with harmonic and rhythmic elements from pieces by Khachaturian, Bach and Prokofiev. Utilizing a Bach-esque basso continuo, John Coltrane’s “26-2” goes in with bubbling energy and a quote of the composer’s “Giant Steps” in the intervallic movement of the piano. Folk legend Nick Drake’s meditative “Things Behind The Sun” stands apart for its poignant, emotional performance without any pretense.

The Adams’ strident take of Wayne Shorter’s “E.S.P.” uses diminished harmonies borrowed from Olivier Messiaen’s Quartet for The End of Time in the piano bass with elements of Indian classical music as a touchstone, the parallelism in the trumpet, piano melody and bass creating unexpected harmonies. The open take of Charlie Parker’s “Cool Blues” provides a perfect space for relaxed brotherly interplay. The stride swing of Art Tatum informs the brothers’ take on Herbie Hancock’s “Actual Proof,” a real departure from the original. The program concludes with Harry Warren’s lovely standard “I Wish I Knew,” performed here with shades of Debussy and Satie impressionism and open Bartók harmonics.

The trumpet and piano rarely appear in a duo setting in jazz. The timbre of both instruments emphasize the attack of the notes and can be generally bright. However, Nicki and Patrick's sounds are distinctive and morph together in interesting ways. Patrick’s trumpet playing is at once lyrical and direct. At times he is reminiscent of the subtlety of Kenny Dorham, while at other times of the incisiveness of Woody Shaw. Overall, the voice-like quality of his sound sits well in the intimate duo context. Nicki's piano arrangements provide a highly detailed, impressionistic backdrop. His solos explore dialogues between the left and right hands through improvised counterpoint, angular bass lines and stride and block chord techniques. In general, while the two are adept at shape-shifting, the album is rooted in a sort of blues vocabulary of the hard bop pioneers which separates it from the broad swath of "third-stream" music.

Nicki and Patrick Adams deliver a cleverly intriguing album with their new release, Lynx. The pieces that they have ingeniously arranged use a wide array of influences and connections that should provide listeners with a new vantage point from which to consider what is “classical” in the musical sphere.