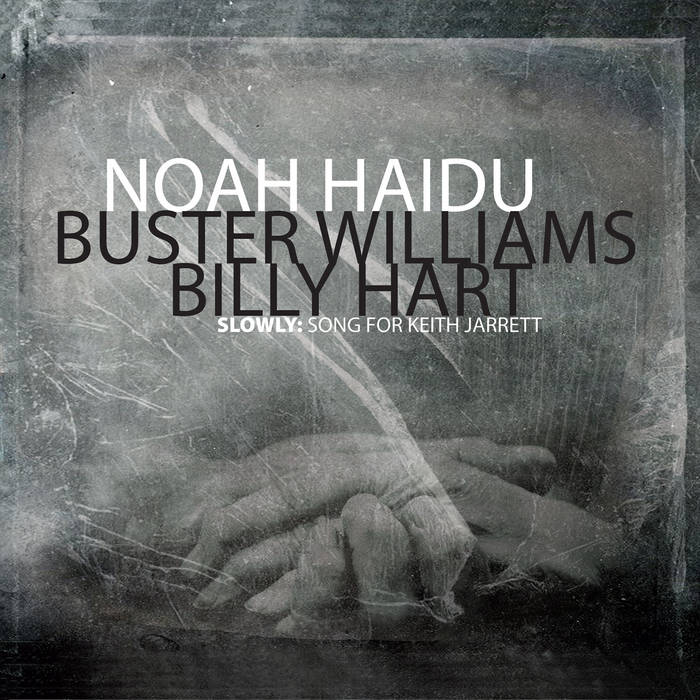 SLOWLY: Song for Keith Jarrett was recorded at the end of 2020, a watershed year for pianist Noah Haidu. As critical accolades streamed in for his innovative multi-media release DOCTONE, Haidu was on the verge of realizing another ambitious project: recording a trio album with one of the greatest bass and drum combinations in jazz: Billy Hart and Buster Williams, whose own remarkable collaboration began half a century ago. The project will be released via Sunnyside Records on May 7, 2021, one day before Jarrett’s 75th birthday.

The decision to focus the album’s material around the great Keith Jarrett crystallized when news broke of Keith Jarrett’s retirement due to a pair of debilitating strokes. “When I heard about Keith,” says Haidu. “I was profoundly moved, and I started to envision the recording with Billy and Buster as a kind of musical response to these events and Keith’s body of work.”

Jarrett’s music carries great personal meaning for Haidu. “My father and I had a tradition of going to hear Jarrett together for several years running,” says Noah. “My dad (who was largely responsible for introducing me to jazz) passed away a week before Keith’s final concert. Attending that concert was one of the ways I was able to mark his passing and start a new chapter in my own life. My 17-year marriage came to an end and I refocused my energies on performing and recording with my own group. Dad and I had been planning to attend that show together but his illness came on quite suddenly and a few weeks before the end he handed me the tickets and said, “you’d better find someone else to go with.” No one knew at the time of the concert that it would be Keith’s final performance.”

The music on SLOWLY flowed organically with Hart, Haidu, and Williams all contributing compositions, but the project was not without its challenges. A planned west coast tour/record date in August 2020 was postponed due to the pandemic. The recording was eventually rescheduled for late November, with Covid’s second surge threatening to interfere again. “We decided not to put off the session a second time,” says Haidu. “It was not just another record date for any of us. We booked a large studio (Sear Sound), put on our masks and played our hearts out. I think you can hear the joy in this time when we are all so isolated. I felt honored that they were willing to come into the city and do this record at a time when just walking out of the house feels like a risk to one’s health.” The trio approached the thematic aspect of the music by maintaining a respectful distance, and a commitment to playing the music their own way rather than recreating performances of the past. “Everyone in the band has such a clearly defined voice,” says Haidu. “There was never a possibility of taking an imitative approach.”

The Jarrett waltz “Rainbow” (which some have credited to his former wife Margot Jarrett) segues into Haidu’s jubilantly rocking “Song for Keith Jarrett,” a nod to Jarrett’s legendary Standards Trio. Haidu elaborates on the repertoire choices in the liner notes: “We decided to include Buster and Billy’s wonderful compositions which highlight the type of interaction and open-ended expression that I feel is the heart of the Jarrett/DeJohnette/ Peacock trio.” Williams brought the dreamy “Air Dancing,” and Hart contributed the lush lyricism of “Duchess” and “Lorca.” The trio also chose a few standards: “Georgia,” “But Beautiful,” and “What a Difference a Day Makes” spontaneously in the studio, building on the songbook canon that helped make Jarrett, DeJohnette, and Peacock into one of the archetypal units in jazz history. Haidu, Williams, and Hart approached the standards with a Jarrett signature: a focus on the original melodies. The improvisations spring from those melodies and the stories behind the lyrics, eschewing the trend to “rethink” repertoire which has become commonplace in recent years. Haidu elaborates: “The idea was to get at the essence of, rather than reinvent these songs. I think that’s something I have absolutely absorbed from Keith Jarrett.” The titular SLOWLY was penned by Haidu and is dedicated to Jarrett’s solo piano style which Noah calls a “genre unto itself.”

Of his relationship to Jarrett’s music Haidu says: “I’ve never thought of myself as a pianist who ‘plays like Keith’. However, his work has increasingly influenced my trio approach in the last few years. I’m getting back to playing ballads, standards and increasingly finding my own voice on standard repertoire. That evolution has been inspired by Jarrett who plays standards with complete authenticity, never sounding like anyone else on this music.”

Almost everything on the album is an unedited first take. According to Haidu, “These songs have a certain simplicity. There’s not a lot of pyrotechnics, everything depends on the band interaction, you can’t hide behind a complicated form or wild rhythms. You have to make a statement, and everyone has to breathe together in the music. The one song we did a second time was ‘Air Dancing.’ We had paused after the first take when executive producer and president of Sunnyside Records Francois Zalacain arrived at the session. Before we went back to record Buster said to me, ‘You’re doing a beautiful job, but this time just go for anything you hear, don’t worry about downbeats and playing every chord, Billy and I got that covered. ‘When Buster Williams says to ‘go for, it I got your back’ that really resonates.”

2020 was a year of highlights for rising star pianist Noah Haidu: his acclaimed Sunnyside Records debut DOCTONE was the first to address the remarkable legacy of pianist Kenny Kirkland, and arguably the first album exploring the work of any jazz artist to be released in tandem with a film and a book. Haidu and the project were the subject of a nationally broadcast news story on NPR and critic Nate Chinen singled out the recording as an important new release on All Songs Considered. DOCTONE was the follow-up to Haidu’s 6-part suite INFINITE DISTANCES which was included in DownBeat’s 2017 Best Albums of the Year issue receiving a rare 4 ½ out of 5 stars.

At age 19 Haidu studied at Rutgers University with the great pianist Kenny Barron, but was soon skipping classes to sit in at jazz clubs in Barron’s hometown of Philadelphia. After his second year, Haidu left college and moved to Brooklyn to devote all his time to practicing and gigging with artists such as Walter Perkins, Duane Eubanks, Essiet Essiet, Melvin Sparks, Jeanie Bryson, and Norman Connors. After the debut of his first album Slipstream, All About Jazz said of Noah, “The cat can play his butt off.” In 2011, Haidu was called a “rising star” in JazzTimes and “an important new talent” in Jazzwise magazine. His subsequent albums and sideman work have seen him collaborating with Ambrose Akinmusire, Mike Stern, Jeremy Pelt, Sharel Cassity, and Vincent Herring. After a 2015 MOCA concert his music was dubbed “vibrant and adventurous” in the Miami Herald. Giovanni Russonello described him as “an artist of focus and vision.” In 2017, DownBeat Magazine featured Haidu in an article entitled “Subversive Soul” and singled him out as an “innovative composer.”

Buster Williams and Billy Hart first worked together in 1969 at a concert with vocalist Betty Carter in Chicago. Both played on classic albums by Miles Davis, but it wasn’t until they joined Herbie Hancock’s innovative sextet Mwandishi that they were able to tour and record together for four year years. As members of Mwandishi both took Swahili nicknames: Hart was called ‘Jabali’ meaning “strong like a rock,” and Williams was known in the band as ‘Mchezaji’ or “player.” Widely celebrated for their innovations in acoustic and electric music Williams and Hart have both been in frequent collaboration with legends such as McCoy Tyner, Stan Getz, and Kenny Barron. In recent years they have been lauded as major composers and bandleaders, both headlining regularly at top venues such as The Village Vanguard and the Montreux Jazz Festival. Billy Hart turned 80 years old within a few days of this recording.