Book II of Arthur: Sir Gawain and The Green Knight

by Logan Strosahl with the Charles Rosen Ensemble 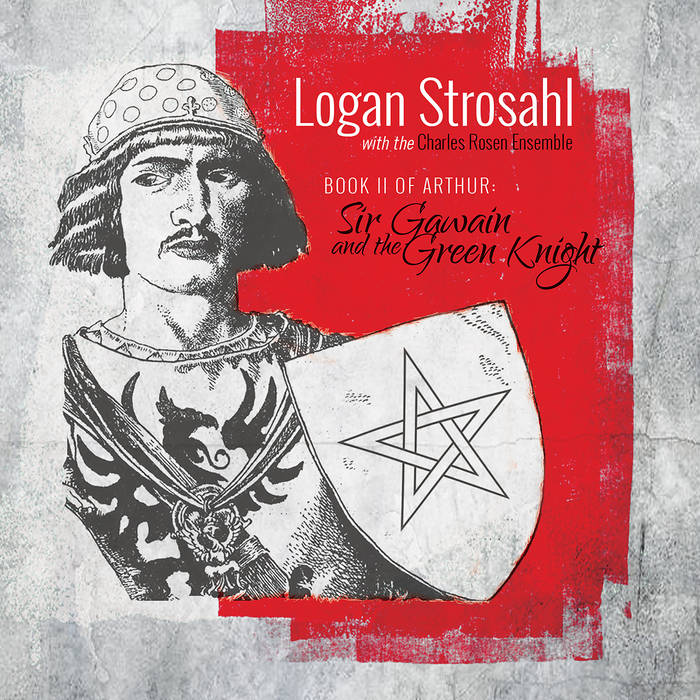 Arthurian tales have captured the imaginations of artists for centuries. In the late 12th-century, the floodgates of Medieval Arthurian literature burst open, and across Western Europe, works about the fictional deeds of individual knights of the Round Table were written. These were tales of mistaken identity, switched births, giants, ceremonial duels, and forbidden love, that portrayed the different knights as flawed upholders of what came to be known as the Chivalric Code.

Saxophonist and composer Logan Strosahl has reanimated one of the most influential of those works through his own idiosyncratic music. Like the protagonist, Sir Gawain, Logan Strosahl took his own musical quest and learned much along the way. The amazing work the young composer created with his Book II of Arthur: Sir Gawain and the Green Knight shows a commanding new level of artistry.

Book II of Arthur: Sir Gawain and the Green Knight moves on from Strosahl’s Book I of Arthur, a musical retelling of Arthur’s ascendancy, to focus on the alliterative Middle English poem from the late 14th century. In the poem, Gawain attempts to fulfill an impossible oath made with a spectral foe—The Green Knight. Somewhere between man and specter, the Green Knight seems to blaze out of the pagan past to remind the Christian knights that the ancient power of that old world is still capable of gripping the new one. Ambiguity pervades the work: games, theatre, illusion, and cycles structure the plot, and characters have different sides that co-exist. Christian morality, pagan figures and symbolism, magic, romance, horror, and adventure are all synthesized in a story that in 2021 is still difficult to categorize.

“Difficult to categorize” could with equal justice describe Strosahl’s music. Informed by many channels but dominated by none, influences operate as elements in a fully integrated, personal language rather than pastiche. While the music in Book II obviously contains a good deal of “classical” craft ranging from the Wagnerian to polyphonic fantasias and to 21st-century composition; it also contains the Blues, various grooves, improvisation, and common-language materials.

Book II is a three-movement work. Act I begins with daydreaming among the Knights of the Round Table, gathered for a Christmas meal, when an incendiary figure clad head-to-toe in green bursts in, goading the Knights to behead him on the condition that, in one year’s time, he can return the dare. After being harangued, Sir Gawain agrees to the wager and lops off the Green Knight’s head…but is shocked when the Knight collects his head and reminds him of his oath. Strosahl’s musical language for the Green Knight is satirical, semi-baroque, distorted by huge gestures and asymmetrical phrases and underpinned by a Courante rhythmic pattern.

Act II begins with the description of the crest on Sir Gawain’s shield, “The Endless Knot”. The knot is a five point star drawn with one continuous line…representing the five points of perfection of Gawain’s character, which is musically explored through a contrapuntal fantasia that recalls the music of the English renaissance. “Pared from Paper” describes the castle that Gawain encounters on his journey to meet the Green Knight. There he meets Lord Bertilak, the enticing Lady Bertilak, and a mysterious older woman. At the castle, Gawain is invited to enter another wager. Bertilak promises to trade the spoils of his hunt to Gawain for whatever the knight might gain during the day while the Lord is hunting. While the Lord is away, Lady Bertilak tries to seduce Gawain—torn between two tenets of the Chivalric code (not refusing a lady and not betraying trust), he accepts only a kiss as a courtesy. This he awards to the blustery lord of the house on his return. In exchange, he receives the dressed carcass of the lord’s prey. This cycle happens three times.

“The Deer”, “The Boar”, and “the Fox” are sections of the piece based around Strosahl’s improvisations, that put him inside Gawain’s head and allude to the animals (probably symbolic representations of Gawain). “The Final Boon” refers to the Lady’s final offer of a magic girdle that will protect Gawain from harm, which he takes and lies to the Lord about receiving when he is offered the dismembered carcass of the fox.

Having broken his chivalric oath by lying, Gawain goes on to confront the Green Knight and accept his fate. “He cometh forth like a flower, and is cut down” looks into the forlorn feelings of Sir Gawain as he goes to accept his likely death (“The Doleful Charge”). To aurally illustrate the fatalistic resolution, Strosahl writes the last Act with a modified Blues form—a music that has helped the oppressed gain agency and dignity within their fate through song.

Once meeting the Knight, and after an initial sally, Gawain presents his neck and the Knight swipes once, coming close and causing Gawain to flinch, prompting mockery from his verdant foe. The Knight strikes again, swerving at the last second. This is the last straw for Gawain, who, in a fury, tells the Green Knight he better make good on his word or prepare for a fight. The final, third strike ends with a paltry nick to Gawain’s neck, at which Gawain leaps back in a rush of adrenaline and relief, his oath fulfilled and his head still attached to his shoulders.

It is then revealed that the Green Knight and Lord Bertilak are the same person/specter. He informs Gawain that it had all been a ruse conjured by Morgan, the sorceress—an important figure in Arthurian lore and Arthur’s half-sister—disguised as the old woman at the castle. The Green Knight lets Gawain know that he handled himself well, except for two things: He should have trusted God, and he shouldn’t have lied to his host. At this point, the mood of the piece changes to jubilation, with a motoric Blues and plaintive alto solo. A grateful Gawain (he’s alive, after all) returns to the Round Table where the rest of the knights poke fun at him.

Strosahl’s suite is intricately woven, with abundant leitmotifs that characterize many symbols and themes from the story. These, and other aspects of the piece, will be discussed in his forthcoming liner notes.